EE 4G fieldtest results: Is it really as fast as the network claims? 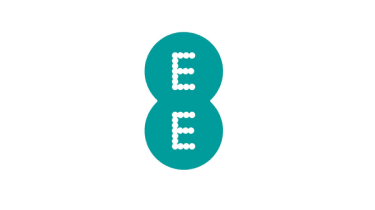 The UK's first mobile 4G network and Fibre Broadband services were launched by EE on 30 October across 11 cities.

We got our hands on the portable Huawei Mobile Wi-Fi E589, which packs 4G connectivity and put it to the test in London to see just how fast it is.

We tethered the Mobile Wi-Fi device to the Sony Xperia S and tested it at seven locations. We aimed to get a diverse range of areas from one of the most busy train stations in London to a wide open space in Regents Park.

To test the download and upload speeds we used the Speedtest.net app. We took three readings at each location and then averaged it out.

To help corroborate download speeds we also timed how long it took to download a 200MB file at each location. This is typically the size of one 45-minute programme hosted on the BBC's iPlayer.

We found average download speeds ranged between 2.44-15.91Mbps, a much broader range than EE touts (8-12Mbps). Most of our test results were on the lower end of the spectrum, which wasn't great and we got nowhere near the touted maximum speed of 40Mbps.

Unsurprisingly, we found that the more congested the location, the slower the download speeds as more people are using their devices. Regents Park offered the best download speeds, whereas Oxford Street was the slowest.

The test results from the Speedtest.net app were as follows: 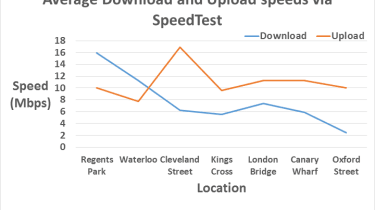 Our file test download backed up the Speedtest.net results when it came to download speeds, with the locations having the same order it terms of speed. 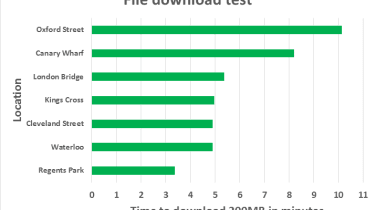 In comparison, the results of the upload speeds were far more unpredictable. For example, upload speed at Oxford Street 9.99Mbps, was pretty much on par with Regents Park (10.05Mbps) even though there was a massive difference when it came to downloading content. There was also an unexplained peak at our office on Cleveland Street (16.91Mpbs).

On the plus side, we did find 4G upload speeds averaged between 7.7-16.91Mbps, which is well above the range quoted by EE (5-6Mpbs). This suggests that 4G is going to be much better for uploading documents and attachments than 3G.

Is it worth it?

With 24-month consumer contracts starting at 36 per month and including a monthly allowance of just 500MB, 4G is expensive considering the speed on offer. For SMBs, packages will start at 35 per month ex VAT.

Unless you splash out on the larger 4-8GB packages you could find yourself using up the allowance in minutes if you want to download video content, especially if it's HD.

If you commute into one of the major cities with 4G from surrounding towns, you'll drop down to HSPA+ connectivity.

Unless you’re in urgent need for fast mobile upload speeds or plan to use wireless connectivity instead of fixed broadband, we’d recommend holding off until other networks such as Three start offering packages as the price across the board will most likely be driven down.