The 7in tablet comes with processor and memory upgrades and is on sale for £415. 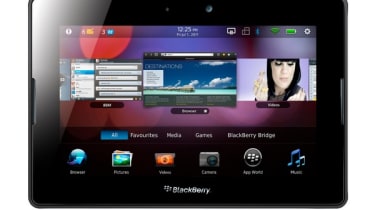 RIM has belated launched a 3G edition of its BlackBerry PlayBook tablet in the UK, as the firm aims to capitilise on the growing interest in 7in form factor.

The PlayBook 3G+ largely unchanged from the original PlayBook, which debuted in 2011. The tablet features the same 7in 1024 x 600 multi-touch capacitive screen along with micro-USB and micro-HDMI ports. The tablet also features a 3-megapixel front facing camera and a 5-megapixel camera on the rear.

The device runs on RIM's propitiatory QNX operating system and is one of the few tablets to support both HTML5 and Adobe Flash platforms natively, as even Android devices have ceased support.

In terms of upgrades, RIM has boosted the processor up to a 1.5GHz dual-core chip, doubled the memory (32GB) and of course added cellular connectivity.

However, the pricetag could be a downfall. The PlayBook 3G+ is priced at 415, which makes it 176 more expensive than the 3G edition of the Google Nexus 7 (32GB). Despite being 34 cheaper than the equivalent iPad mini 4G, Apple has a flourishing ecosystem of apps, TV shows, music and movies to offer customers.

Despite being one of the first prominent 7in tablets on the market, the PlayBook was deemed to be a disappointment on launch. The device was plagued with bugs and a lack of apps. The tablet also needed to be used in conjunction with a BlackBerry smartphone to make it fully functional.