RIM's forthcoming smartphone OS has some excellent features including a unique keyboard, but will it be worth the wait? 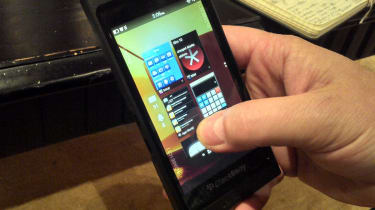 BB10 devices will be officially unveiled at the end of January 2013, after the firm decided it wanted to perfect the OS instead of rushing it out.

IT Pro had a chance to play with RIM's Dev Alpha B handset, which has been handed out to developers across the world. The device runs the QNX platform or BB10 as it is now known, which RIM debuted in its PlayBook tablet.

The operating system has plenty of unique features which differentiate it from Android, iOS and Windows Phone 8. We take a look at whether it will be worth the wait.

Encryption has long been a strength of the BlackBerry platform. The BB10 platform has received FIPS 140-2 certification so it's likely to be deployed in governments.

The software also comes with a built-in setting which allows users to switch between work and personal applications. The system will also allow IT admins to put restrictions in place. So, for example, sensitive data may not be copied to the personal workspace.

In the event that a user leaves the firm and takes the BlackBerry device with them, admins will be able to remotely delete all corporate information without affecting any personal data. This could make BB10 handsets highly desirable in sectors where information needs to be kept confidential such as healthcare, government, legal and financial verticals.

Navigating the BB10 operating system is entirely based on gestures there are no physical buttons on the front of the device.

To open the lock screen, users place a thumb on the bottom of the screen and drag it up. This slowly makes the transition to the homescreen, peeling away the top layer to show the information below. 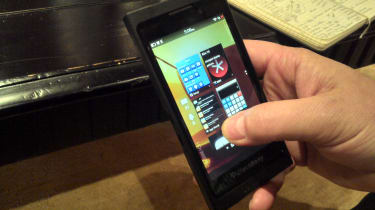 Once you're onto the homescreen you're greeted by eight panes, which are essentially a combination of a Microsoft Live Tiles and an Android widget. They're not resizable though which is a pain - and I did find them a bit too small to be displaying useful information.

Swipe left and you'll go directly into the app menu. Whereas a swipe right will bring up notification settings.

Menus are context sensitive and will require you to hold your thumb on screen and then slide it to choose a specific option. For example when you are in the email client - pressing and holding an email will bring up options on the right hand slide - such as reply, forward or mark unread. 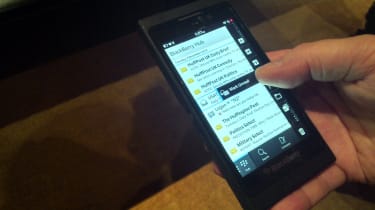 Although the system seems pretty straight forward, it is all too easy to choose the wrong option, so it remains to be seen how intuitive this interface really is.

One of the most impressive aspects of BB10 was the keyboard, and it could be the best native touch screen input method on any mobile platform. Instead of just trying to mimic rival operating systems by improving autocorrect, RIM has taken prediction one step further.

Based on SwiftKey's engine, the native keyboard will learn your habits so that it can predict which word you are going to use next.

Typing has also been modified as RIM has introduced a "flick" method. Instead of typing out words and pressing the space bar to initiate the autocomplete of a word - you simply flick up on a letter to add a word.

As the system offers up words that you are going to type next it is possible to complete entire sentences using just a handful of flicks which saves tens of clicks at a time. 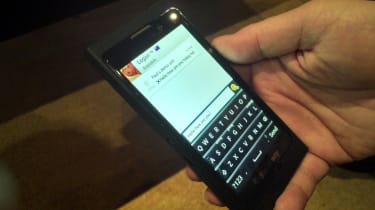 For example the sentence "Hello, how are you doing", can be created by tapping the letter h and then flicking the letters h-h-a-y-d to complete the designated words. Getting used to this will take a couple of days, but once you've mastered it, it could theoretically be faster than even touch typing.

The Achilles heels of BB10 devices on launch will be the apps available there are 25,000 apps available for the PlayBook tablet which runs the same OS. However, at this time it is unclear how many applications will be available on the smartphones.

RIM has yet to unveil the exact specification. However, the final model is set to closely resemble the Dev Alpha B handset, which features a large 4in+ touch screen display, micro-USB and micro-HDMI ports, as well as a sealed in battery. 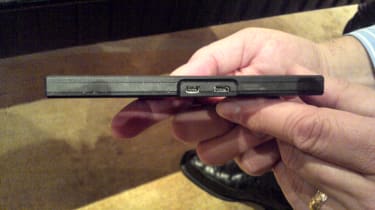 RIM noted that it will release two flagship devices one with a QWERTY keyboard and a full touch screen model. Pricing as always remains under wraps until closer to launch.

Although there's plenty to like about the BB10 platform and RIM maintains a reasonably firm grip within the enterprise, the firm could struggle to shift units especially as Android and iOS have become the major players. Windows Phone 8 is also shaping up to be competitive in the enterprise, so 2013 is going to present a lot of choice for business users.

BB10 is widely seen as RIM's last chance to catch up to Android and iOS in terms of functionality. It has the makings of a great OS, but the lack of apps on launch and a possible steep price could put off individuals. We see this proving a hit with firms which already have BES installed and for whom security is a priority.