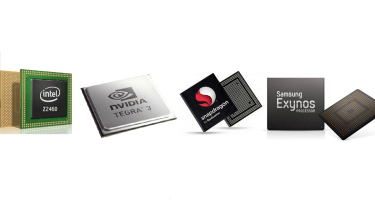 Unlike the synthetic testing, the real-world results don't correct for the number of cores - although the adjusted scores do scale down for a theoretical 1GHz implementation to level the playing field. The score is achieved by combining the results of two popular real-world benchmarking packages, Qualcomm's own Vellamo and Futuremark's Peacekeeper. Both measure performance on common web browsing tasks - one of the main functions of a smartphone. 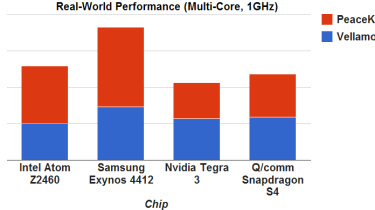 This time the results delivered less of a surprise. Samsung's Exynos chip proved the fastest on test, easily outpacing its rivals in both the PeaceKeeper and Vellamo tests.

Coming up close behind was Intel's Atom, which even when robbed of its 2GHz clock-speed advantage shone in the in-browser PeaceKeeper benchmark testing. This is more evidence that Intel is onto something with its Atom architecture, and ARM's various licensees should watch out.

Nvidia's Tegra 3 placed bottom this time, with the Peacekeeper testing in particular performing extremely slowly. Without the advantage of a 1.5GHz clock speed, the graphics giant's design just doesn't measure up to the competition.

Qualcomm's Snapdragon S4 Pro proved distinctly middling too, performing well on the Vellamo test - created, it must be noted, by Qualcomm's own software engineering division - but failing to make much of an impact on third-party PeaceKeeper test. 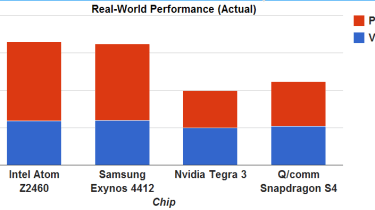 Looking at the actual in-handset performance, rather than a theoretical 1GHz implementation, things are close at the top end: here Intel's clock-speed advantage pips the Exynos 4412 to the post. At the bottom end Nvidia still trails behind even Qualcomm's surprisingly slow Snapdragon S4 Pro.