UPDATED: With identical 7in displays and £159 starting prices, we put these Android-based devices to the test. 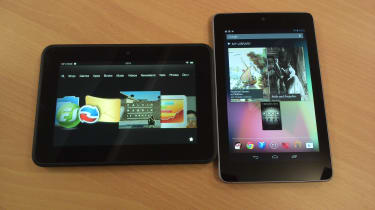 This article was originally published on 3/12/12 and has since been updated.

Although the iPad has been the dominant tablet since its launch in 2009, the appearance of high-end 7in devices provide users with a genuine alternative, especially for users looking for a pocket friendly companion tablet.

The Amazon Kindle Fire HD and the Asus manufactured Google Nexus 7 are the two most popular 7in devices on the market. Both tablets have a starting price of 159, and run variants of Android. They are also considerably cheaper than the 7.9in iPad mini, which starts at 269, and boast better specifications.

On paper the devices have identical specifications in terms size and resolution. General responsiveness of the devices is good. We found that the Fire HD occasionally requires more than one prod. 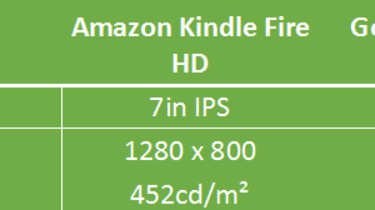 In our tests the Kindle Fire HD clocked a higher brightness. However, when placed side-by-side you'd probably think this was the other way round - thanks to the backlit nature of the Nexus 7.

The universal opinion in the office was that the Nexus 7 device delivered a brighter picture with more accurate colour replication. The Fire HD exhibited a yellow tint which was prominent when carrying out activities which make use of a white background such as web browsing or e-book reading. 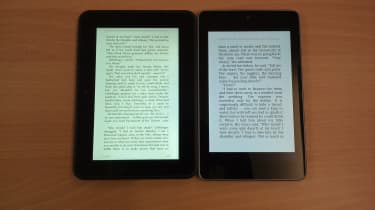 We found the screen on the Nexus 7 to be brighter (right), despite the measurements telling us otherwise

When it comes to dimensions the Kindle Fire HD is visibly larger. Amazon's tablet has a chunkier frame it's 2cm wider than the Nexus 7 and this makes it a tad harder to grip in one hand when you're using it in portrait mode. The extra girth also means that you won't be able to squeeze the Kindle into some jacket pockets, like you can with the Nexus. 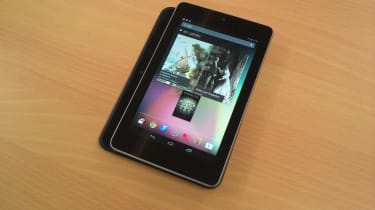 The Kindle Fire HD is also heavier of the two devices. Amazon's tablet weighs in at 395g, making it 55g heavier than the Nexus 7 (340g).

The Google tablet is lighter and narrower so it's the more portable of the two devices. Despite having identical screen sizes and resolutions on paper, the display on the Nexus 7 is also superior.

Both manufacturers tout similar battery life for the devices. Google claims the Nexus 7 will last up to 10 hours whereas Amazon suggests its device can push up to the 11 hour mark.

During moderate usage, we found both devices easily lasted the day. In our intensive battery test we turned the screen on both devices to full brightness and played looped a video until the tablets gave out. 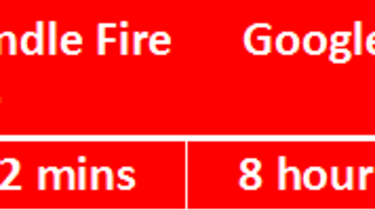 The numbers don't lie in this case so it's the Nexus which triumphs in this category.