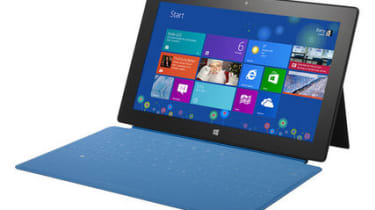 Many in the industry said Windows 8 might revive slack PC sales, but a report by NPD Group, which tracks computer sales weekly using data supplied by retailers, dampened those hopes.

Since the launch of Windows 8 on October 26, Windows laptop sales are down 24 per cent.

On the same day, Microsoft announced pricing for its latest device designed to break Apple's stranglehold on the tablet and lightweight laptop market. It is offering the Surface tablet running the full version of Windows 8 from $899, pitching it somewhere between Apple's latest iPad and MacBook Air laptop.

Since the launch of Windows 8 on October 26, Windows laptop sales are down 24 per cent, while desktop sales are down 9 percent compared with the same period last year, making an overall 21 percent dip, NPD Group said.

Usually, a Microsoft release boosts PC sales because many consumers hold off purchases for several months so they can obtain the latest software immediately.

If the NPD's sales trends are borne out over the rest of the holiday shopping season, it would be a huge disappointment for Microsoft and PC makers such as Dell, HP and Lenovo.

"After just four weeks on the market, it's still early to place blame on Windows 8 for the ongoing weakness in the PC market," said Stephen Baker, vice president of industry analysis at NPD. "We still have the whole holiday selling season ahead of us, but clearly Windows 8 did not prove to be the impetus for a sales turnaround some had hoped for."

NPD's data neither includes Microsoft's first Surface tablet, which is only available in its own stores, nor takes account of sales of PCs to businesses, which has recently been a much stronger market.

Microsoft's first Surface tablet runs a version of Windows called RT, created to work on the low-power chips designed by ARM, which dominate smartphones and tablets but are incompatible with old Windows applications.

A larger, heavier tablet -- officially called 'Surface with Windows 8 Pro' -- will be on sale from January, running on an Intel Corp chip that works with all Microsoft's Windows and Office applications.

Microsoft said on Thursday it would price the new Surface at $899 for a 64GB version and $999 for a 128GB version. That does not include the optional cover, which doubles as a keyboard, costing $120 to $130.

The company describes the wifi-only device as "a full PC and a tablet". It is priced above Apple's 64GB wifi-only iPad at $699 and at the low end of Apple's MacBook Air line of lightweight laptops which start at $999.

The Intel-based Surface is thicker and heavier than both the iPad and Surface running Windows RT, but at 2 lbs (0.9 kg) is lighter than the MacBook Air.

Since Microsoft introduced Windows 8, it has accounted for only 58 percent of Windows computing device unit sales, compared to the 83 percent Windows 7 accounted for at the same point after its launch in 2009, NPD said. That was partly caused by poor back-to-school sales that left many Windows 7 PCs on retailers' shelves, NPD said.

One patch of light for Microsoft is strong sales of touchscreen Windows 8 laptops, which accounted for 6 percent of Windows laptop sales, according to NPD.

It is still unclear how successful Microsoft's Windows 8 will be in the long term. The touch-optimized, tablet-friendly system was designed to appeal to younger users with a colorful, app-based interface, but has confused some traditional Windows customers more used to keyboard and mouse commands. Beneath the new interface design, it does not offer any radical new computing power.

On Monday, a top Windows executive said Microsoft had sold 40 million Windows 8 licenses in the month since the launch. That is ahead of Windows 7 at the same stage, but it was not clear how many of those were pre-orders, discounted upgrades, or bulk sales to PC makers.

According to tech research firm StatCounter, about 1 percent of the world's 1.5 billion or so personal computers - making a total of around 15 million - are actually running Windows 8.