A 10in Windows 8 Pro tablet that comes with functionality boosting covers. 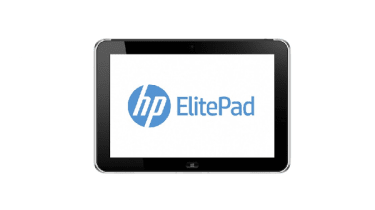 HP's Windows 8 tablet offering is aimed solely at the enterprise market. To differentiate the ElitePad 900 from forthcoming Dell and Lenovo products, HP has played around with the design.

The ElitePad 900 looks like a regular tablet on its own, but can be slotted into one of the specially made "jackets" that HP plans to release.

At launch there will be two of these accessories available a Productivity Jacket and an Expansion Jacket. 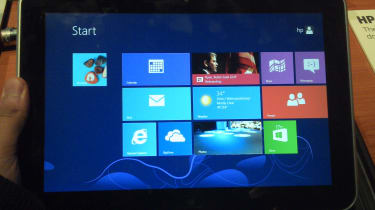 The Expansion jacket not only protects the device, but boosts the functionality adding 2 x USB ports, an SD card expansion slot and HDMI output. Meanwhile, the Productivity Jacket will turn the tablet into a pseudo laptop, by adding a keyboard an extra battery will also boost the device's up-time to 24 hours, HP told us. 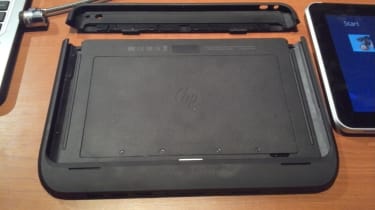 The Expansion Jacket slots onto the ElitePad with ease

We had a play with the less cumbersome Expansion Jacket. This comes in two pieces. The tablet slides into the larger body and then top clips on. It works effortlessly and it slides off easily too. The standalone tablet weights in at 680g, and we found the jacket added a minimal amount to this. 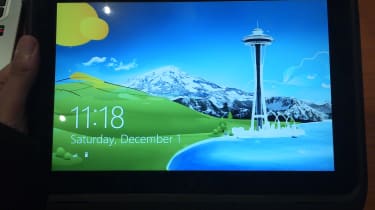 Being enterprise-specific, the ElitePad 900 runs on Intel's x86-based architecture and supports the fully featured version of Windows 8. The specific machine we played with was running Windows 8 Pro and was powered by an Intel Atom Z2720 CPU (1.8GHz) together with 2GB of RAM.

We found the Gorilla Glass display to be responsive and colours were replicated well in low-light conditions. The display has a 1280 x 800 resolution and supports 5-point multi-touch as well as a digitiser. The 10.1in screen size does give the device a large footprint so you won't be fitting it into a jacket pocket.

In terms of design the ElitePad pre-production model looked and felt solid, thanks to the machined aluminium. 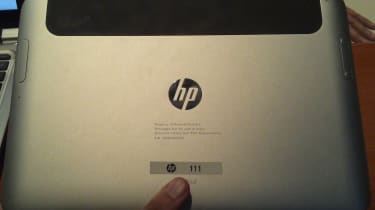 HP offers a reasonably meaty 64GB of internal storage, which can be expanded using the inbuilt micro-SD card slot. Users can also opt for a 3G enabled product so it does not need to be tethered on the move.

The connectivity/battery enhancing features, together with the military grade FIPS certifications, means the ElitePad 900 could be particularly useful for those working in outdoor industries such as construction.

Emirates Airline has already signed up to be the first global customer ahead of the launch in the first week of January 2013. The device will be rolled out to 100 cabin-crew in December and up to a further 900 in January.

Stay tuned for a full review.

Overall, we’re impressed by the ElitePad 900 – it’s a well built tablet which allow you to add connectivity using the unique jackets. As with all business tablets you’ll get the full working version of Windows 8 and HP is also hoping that it can attract customers with its value-added services such as LANDesk Management Suite.