Windows 8 tablets: Putting them to use on the frontline

With tablets becoming more prevalent in businesses, some companies are taking this to the next level by introducing them to the frontline. 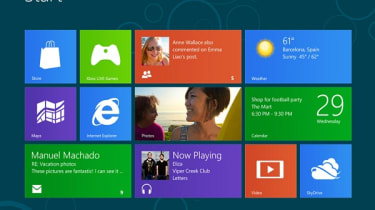 "The one challenge was which device to use," said Griffiths. "It needed to have decent communication features data/Wi-Fi/3G/GSM to use around the world in all locations Emirates flies to."

The company explored a lot of hardware options, but the problem they found was many of the devices were built for consumers rather than enterprises.

"The HP devices can be replaced quickly, for example, rather than having to be sent away because [they] are built with replaceable parts we can fix in house," Griffiths pointed out.

"If a screen cracked on a government tablet for example, but the motherboard was still working, they would hesitate if they had to send the hardware away because there would be a lot of data still accessible on the tablet."

"The new tablets are a refresh of what we had. We had a series of hot house sessions with engineers where we showed them different tablets, platforms and form factors," said Scott.

"We decided it needed to be a general purpose machine...and it seemed most people wanted a convertible tablet that could be used while on the move, but as a laptop in fixed places, like their own homes and offices."

Because BT had previously used Panasonic Toughbooks, they were familiar with the system and knew it would work with all the software they needed, while addressing the important needs of security and portability.

Once the company had decided on the type of tablet, they then had to choose between Android, Windows 7 and Windows 8 operating systems.

Emirates selected HP's ElitePad 900 and plans to roll out 1,000 tablets to its flight staff by the end of January 2013.

The tablet allows the airline to run its software efficiently and securely, but it is also lightweight with a long battery life, the company said.

Which apps to use?

Emirates is running a proprietary app, which was developed in-house, but Griffiths admitted that the selection available to Windows 8 users is a little light.

"There may not be as many apps available on Windows 8 as other platforms, but those that are available do what you want to do," he explained.

"However, with 500 apps being added a day, I understand that [as] more people use the platform, more apps will be introduced."

The Emirates app is one of the most complex the airline has ever built, as the airline has a number of others available on different platforms, including Android and iOS.

The same one for Windows 8 was built in just a couple of weeks, which is a really fast turnaround.

"Because Emirates is a Windows launch partner, we were able to work very closely with Microsoft on the architecture and customer experience," said Griffiths.

"It was built specifically for the Windows 8 design experience [and] had to be intuitive [because] people shouldn't have to be trained to use it."

BT is using the same apps as before, because the licences are still valid for its new Toughbooks.

The value of apps on Windows 8 is much higher, said Scott. They're smaller, lighter weight and, therefore, the battery lasts longer because they are not so memory intensive.

BT will be developing its own apps to replace much of its legacy software in the coming months, and plans to work with Microsoft's development teams to analyse which ones need to be redeveloped for Windows 8.

"As a Windows 8 global launch partner, a big challenge was how to train staff to use the new app on tablets," Emirates' Griffiths explained.

"We started training the first 100 people using Windows To Go...because we only had a limited number of tablets available, so we had to find a way to train staff but without the[m]."

Emirates gave out Windows To Go on USB keys to staff, meaning they could boot up the experience on their corporate device and practise using the app while away from the training environment.

"From a deployment perspective, it was a really neat way to get people using the platform without having to get everyone in a classroom environment," Griffiths added.