The road to 5G

As 4G services finally appear in the UK, where's the technology set to head next? Simon takes a look... 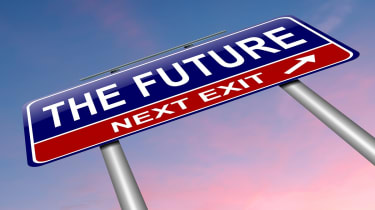 The clumsy rollout for 4G services in the UK is set to continue for a while yet, with consequences over the manner in which it's been handled likely to continue for some time.

After all, as things stand, only EE - the rebranded union of Orange and T-Mobile - has a 4G service to offer, with the likes of Vodafone and O2 having to impatiently wait for the Government to sort out its bandwidth auction (bemoaning the advantage that EE has been given as they do so).

That process is set to be concluded, as IT Pro has previously reported, by March of 2013, with services able to go live by around June. That gives EE a significant lead time on its competitors, and there will be no shortage of lawyers mulling over what to do about that.

Perhaps the biggest challenge for 5G will be coverage. Both 3G and 4G use a system of masts to broadcast their signal, and one area that's ripe for exploration is different ways to bounce said signal around.

However, by the end of 2013, projections suggest that 70 per cent of the UK will have 4G coverage and, by the end of 2014, that number will have shot up to 98 per cent (3G coverage stands at more than 99 per cent, according to Ofcom numbers). Assuming the similar pattern is followed as with 3G, and pretty much every other mobile technology, from that point on competition will kick in, prices will drop, and take-up of 4G services will escalate.

With that, though, comes a fresh problem. The British mobile networks are already facing heavy, growing demand for data services, with Ofcom revealing that data usage had doubled in the space of just one year. Current predictions from the communications watchdog suggest that mobile data demand by 2030 could be anywhere up to 80 times the current levels.

That immediately suggests that the 4G network, even with the added capacity post the Government's auction, simply isn't going to be enough. If anything, it's going to fuel data demand (advertising of 4G services is already talking of streaming full movies, whilst being less overt about the data caps in place), and there are serious question marks over the capacity of the existing infrastructure.

This hasn't gone unnoticed either, and work has already started on the next generation of mobile network technology, unsurprisingly called 5G.

In mid-November, Ofcom opted to seize the initiative somewhat, and published plans to "support the release of spectrum for future mobile services, possibly 5G, when the spectrum becomes available".

It's the latter part of the sentence that's the obvious issue here. Availability of spectrum frequencies is hardly sizeable, and as such, Ofcom has announced that it's going to look to use the 700MHz band.

That band already has its fair share of residents, though, given that it's the one currently used for terrestrial digital television services. Ofcom has noted that 700MHz can be adopted for future mobile data services, without having to go through the expensive business of retuning everyone's television's sets again.

It's not just Ofcom attempting to tackle the problem either. Just a month before, The UK Department for Business, Innovation and Skills gave the green light to a funding application from the University of Sussex. This granted the university a fund of 35 million - paid for by a mix of the UK Research Partnership Investment Fund and an assortment of businesses within the mobile market - to establish a research centre for 5G technologies. Furthermore, the University of Sussex wasn't the only beneficiary. Six other applicants received monies ranging from 10 million to 35 million.

The clear intention here is twofold. Firstly, to accelerate the roadmap to 5G technologies. And secondly, to ensure that Britain doesn't lag behind other developed nations, as it has in the past, when it comes to their implementation.

But what shape will these technologies take? And what advantages will they offer over what's available now? The promised speeds of 4G in the UK are between eight and 12Mbps, although inevitably, complaints are already arising that end users aren't getting anywhere near those numbers. In fact, in some quarters, there are murmurings that 3G speeds have been compromised to fuel faster 4G.

Assuming, not unreasonably, that it'll be 2020 before we see commercial 5G services in the UK (at the very least), the instant benefit will inevitably be faster speeds. As more and more rich content is streamed, so data demands will continue to grow, especially, as mentioned earlier, customers are already being encouraged to stream movies on the move.

However, perhaps the biggest challenge for 5G will be coverage. Both 3G and 4G use a system of masts to broadcast their signal, and one area that's ripe for exploration is different ways to bounce said signal around. Given the growing number of devices set to utilise an internet connection - white goods, cars and such like - in the decade ahead, using such products as hot spots in their own right has already been mooted as one possibility.

Furthermore, more intelligent quality of service prioritisation of network traffic, and an enhanced way of sending packets of data around a network are also avenues for research. In short, the benefits of 5G may be as likely to come from differing ways of approaching software as they are hardware and utilising frequency space.

However, for the mobile operators, there's likely to be little incentive to push forward with 5G until they can see a heavy return on their investment in 4G services. Take up of 4G in the US, for instance, has been sluggish so far, and that suggests that customers aren't yet seeing benefits that they're actually craving on their mobile devices. Whether that's reflected in the UK we won't get a full sense of until later in the year.

Thus as the drive towards 5G services begins, the words of Bruce Girdlestone at Virgin Media Business, talking to IT Pro last month, could be telling. "Many mobile users are yet to even experience 3G as they really should," he said.

While consumer take-up remains so far behind, expect mobile operators to continue to leave themselves with a lot of ceiling room, which they're unlikely to exploit until they commercially need to.