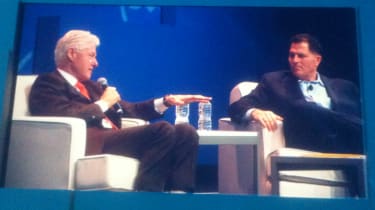 Michael Dell used the opening keynote of his firm's annual tech conference to talk up Windows 8 and set out his firm's big bets for future growth.

The speech was made on the second day of Dell World 2012, which is being held this week in Austin, Texas.

A company on the move

Dell used his address to reiterate that his company is no longer just a PC manufacturer, but a "solutions vendor" with products spanning cloud, virtualisation and client computing.

We recognise that we increasingly live in a multi-device environment

"Over the last several years, innovations in the cloud and big data and social media and security have changed the model for how technology is being consumed and delivered," he said.

"And we are working to democratise and simplify these innovations, putting more power in the hands of more people than ever before."

Dell said customers are now demanding greater agility and efficiency from the technology they use, as well as better insights into data and improved security.

His company is working on products that solve these issues in a way that goes beyond what Dell has typically been known for.

"That is the consistent and disciplined strategy that we have been pursuing at Dell for about the last four years, since we launched our transformation to become the industry's leading provider of end-to-end solutions," Dell said.

"And here at Dell World we are highlighting the breadth of the $10 million multi-year investment that we have been driving to realise this vision," he added.

Not the end for the Dell PC

Dell was also keen to stress, however, that his company will not forget its roots as a PC vendor, as it pursues new avenues of business.

"We recognise that we increasingly live in a multi-device, bring your own device (BYOD) kind of environment. We are also seeing that the virtual [PC] is being adopted at a tremendous pace," said Dell.

"That said, we still believe that PCs are important. There are about 400 million PCs sold every year and the install base of PCs is about 1.5 billion. Overwhelmingly, PCs are still how business gets done," he added.

He also claimed, on the back of the launch of Windows 8, the PC market was "on the cusp of another software revolution," and this will lead to the unification of touch screen and laptop devices.

"The possibilities are endless and as adoption accelerates with Windows 8 and with touch, we are going to give the entire 1.5 billion install base of users a reason to get a new PC," he added.

His company is also seeing a high level of interest in Windows 8 - not just among consumers, but also among business customers.

"What we are seeing...is an immediate need because CIOs are worried about the ramifications of a BYOD world," Dell said.

Dell described his company's spate of acquisitions over the years as the assembly of a "really smart portfolio providing for a rich foundation and an incredible platform".

This platform will enable the organisation to move into a number of new areas, including backup and recovery, mobile device management, and data security, he stated.

"We have been actively assembling lots of new technology with a number of acquisitions, but behind the scenes we have been integrating these into powerful and practical solutions," he said.

"For example, our CIO power board integrates software from the entire portfolio of solutions to provide a unified view of your entire environment, including IT services and managed resources," Dell explained.