There's a lot to like about the Xerox WorkCentre 6605V/DN printer, but as our reviewer discovered, the benefits don't come without some downsides too. 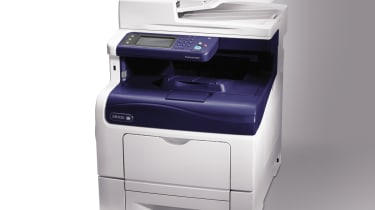 Unfortunately things didn't go smoothly when it came to installing Xerox's software. The setup program detected and installed the printer without issue and finished, informing us that we could now scan and print, however, at the same time it had launched a Scanner Connection Tool which we were yet to complete.

This detected the scanner over the network and we assumed that all was well, but when we came to scan this turned out not to be the case; each time we attempted to launch the TWAIN interface we were told that no scanner was connected and were prompted to use the tool to find one. When we did this, apparently successfully, we had to restart the TWAIN interface, at which point we were back at square one. Downloading newer drivers didn't cure the issue, leaving us able to scan only via a PC connected using a USB lead or directly from the device.

This difficulty was unfortunate, because otherwise the TWAIN driver proved to be excellent; presenting all the necessary options in a clear way and omitting only an auto-marquee feature. We were less keen on the print driver which, while unobtrusive for those sticking to the defaults, sends the user scurrying into the Advanced settings to change something as simple as the page orientation.

This is a quiet device, as far as office MFPs go. The printer produced no significant vibrations or clunks and fan noise was comparatively muted, although the fans did remain running for a time after print and, surprisingly, scan jobs. We measured 22-watt power consumption with the screen lit and the device standing by, from which position the 6605 delivered a first page of text in 15 seconds. Power use dropped to just five watts in sleep mode but the printer was still reasonably quick to wake, delivering a first page in 26 seconds.

We include the time to first page (TTFP) in our tests to give a better idea of a printer's true speed over a single job, although this means that the result tends to be some way short of the manufacturer's stated speed. Even so, the 6605 reached a creditable 26.3 pages per minute (ppm) on our 25-page mono text test, and with the TTFP discounted it was bang on Xerox's 35ppm claim.

Unfortunately the same wasn't true for our 24-page colour graphics test, where the printer paused frequently between pages and could reach only 9.4ppm. This is a graphics-rich test involving a fair amount of data, and we initially suspected a poor wireless connection between our test laptop and router, however the result remained identical when we switched to gigabit Ethernet connections. This result, along with very slow photo prints, suggests that the printer could do with more processing power for handling complex graphical jobs.

Despite the wait we were impressed with the quality of colour prints and graphics, which exhibited a rich and even finish and quite accurate colours without banding, dithering or any other artefacts. We were less happy with mono text, however, which was composited from black and colour toner in some documents unless we forced it to greyscale with the driver. In addition to being wasteful, mis-registration meant that we could spot colour shadows with the naked eye. Under magnification we also noticed that the printer was printing a pattern of yellow dots in white space on the page.

Once we got the 6605's scanner working, we were thoroughly impressed by its TWAIN interface, its quick scanning speeds, and by the quality of the results. Scanning from the platen glass this MFP produced the most sharply focused high-resolution scans we've seen from an office device. With auto-exposure left off our scan target was perfectly exposed, although with the feature on very light shades became over-exposed, losing subtle details.

As you might expect with such an impressive scanner, this MFP produced excellent copies from both the platen glass and ADF. Single page copies were swift, with copies taking 11 seconds (14 in colour), while the ADF dispatched a 10-page copy in just 37 seconds (56 seconds in colour).

There's much to like about the WorkCentre 6605. It's got the perfect feature set for the job, is easy to use, makes excellent scans and copies and is quick to print regular text documents. Unfortunately it's less sprightly when it comes to printing graphics, and we weren't able to get its scanner to work over the network. Moreover its running costs, while not unreasonable, aren't especially attractive. It's a decent MFP for smaller firms, but it's hard to recommend unreservedly.