Contributing editor Steve Cassidy casts his mind back to what tickled his tech fancy in 2012. 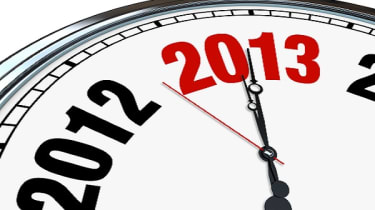 I confess, I had to stub my toe good and hard before a hook for a look back at 2012 in IT really occurred to me. The obstruction that crystallised my thoughts was a substantial lump of computing horsepower - a Dell Precision 450. Long in the tooth and widely regarded as the kind of boat-anchor you can get your work bashed out on year in, year out. As indeed I had; but partway through 2012, I rather sidelined the old bus, because I got my hands on an Optiplex 160.

For those not obsessively following every twist and turn of the Dell product catalogue from one year to the next, I should jump to my punch line: The Optiplex 160 is an Atom-based mini desktop machine, made out of a mix of laptop and desktop parts: it would fit comfortably inside the card slot bay of the Precision 450 that had my big toe a throb for the Christmas break.

Yet, built up with the sweepings of my parts bin, this unassuming, almost silent box starts and runs faster than the boat-anchor workstation I was using to look up the manuals and compatibility data to get it rolling. What's more, it does it on a sixth of the electricity - and yes, I have a current meter plug to tell me exactly how much juice a bit of kit is pulling.

Equipping an office with a load of these means that the business of computing, suddenly, takes less power than the business of lighting the place so that people like me don't stub their toes.

Then there was the conversation which actually took place in 2010, with Jack Lang, who was and is one of the prime movers behind the Raspberry Pi project: A push, he was clear even then, to overcome the barriers to a new generation learning to program. A vital project philosophically, to attract the skilled away from the hacker lifestyle, to break the slow development grind we've come to think of as normal, to reintroduce the idea of a computer being a thinking machine as distinct from a selling one.

But also, even then, Jack and his team were very clear - there was no point wishing you could engage with the Third World's burgeoning populations, if your computing device took more watts than the whole of the Shanty Town it was running in.

Thinking about green computing and economic impact put me in mind of my two most memorable trips of the year: First to Lausanne and the joint project there with the Montreux Jazz festival. No intellectual slouches, the Lausanne team had been flirting with the mega-scale storage marketplace for some time. This wasn't a case of limited academic budgets and the IT equivalent of a begging bowl: With the gold-plated brand of the Jazz festival behind them, the boot was on the other foot. What maker of high-end kit wouldn't give their best cufflinks to get mentioned in the same breath as this project?

So Lausanne went with... Amplidata. A small Belgian technology start-up company, built up by a team of Venture Capital-surfing technocrats. One of the most important reasons behind the choice was energy efficiency, and Amplidata got the high score there because their storage technology puts the necessary CPU grunt quite close to the disks... using Atom processors.

Then there was VMworld in Barcelona, in October. A lot of fuss was made about a VM host box achieving a million IOPs, which is one of those magic attention-getting numbers that proceeds to get less and less sustentative as you dig further into the circumstances that brought it about. So I dug, and bumped into Violin Memory. They make big tin cupboards, crammed with little smartphone-shaped pods of flash memory, each of which hosts its own super-small, super-efficient autonomous processor. I was perversely pleased to hear that this isn't an Atom, but that little wash of relief was quickly dismissed by the thoroughly spooky idea that their tin cabinet didn't need an accompanying UPS: There's enough residual current in the PSU that it can write pending changes safely away to Flash even after the "no power" alarm has been raised.

I think you can see the trend I'm pointing to. Overwhelmingly in 2012, the action seems to be shifting, away from the monster CPUs we were all so keen on in the post-Millennium years, and towards stuff which gets the job done smarter. I started out the 2012 business year thinking that I would be needing to sell and trade and upgrade my way to at least a six-core processing platform by the end of the year, just to keep up with trends and have a credible basis for writing reviews: Now, as 2013 settles into the hot seat, I'm not so sure. Windows 8 RT, rackmount servers with whole arrays of ARM chips on them, Intel's Atom platform making it into the mobile phone market - all signs of a seismic shift in the way we compute, away from heavy metal and towards a lighter, more efficient, smaller footprint.