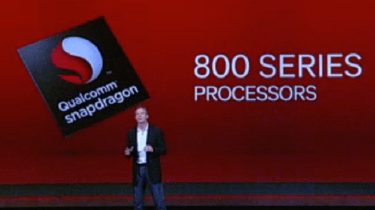 Qualcomm is the latest chip vendor to take the wraps off next-generation mobile processors, with the firm laying down the gauntlet with its Snapdragon 600 and 800 offerings.

Key specifications of the flagship Snapdragon 800 include a quad-core layout with clock speeds of up to 2.3GHz per core. Qualcomm has packed in an Adreno 330 GPU, which the firm claims offers 2 times the compute performance of the Adreno 320.

Paul Jacobs, CEO of Qualcomm, claimed the 800 processor will perform 75 per cent better than the S4 Pro chip, although we're not too excited yet as the S4 Pro placed bottom in the IT Pro smartphone group test.

Notably, the firm has also integrated 4G connectivity into the SoC design something which main rival Nvidia failed to do with the launch of the Tegra 4.

The Snapdragon 800 will be able to offer mobile data transfer rates of up to 150 Mbps - fast enough to comfortably stream full HD content on the move.

Qualcomm is also debuting its wireless 802.11ac technology, which Jacobs claimed will help to provide improved Wi-Fi connectivity and speeds of up to 1 Gbps.

UltraHD 4K resolution (4096 2304), the next big display technology, will also be supported and Qualcomm has built in dual-image signal processors to allow users to take 3D photos.

Meanwhile, the mid-range 600 series will boast quad-core CPUs running at a slightly slower clock speed of up to 1.9GHz. The 600 range will also pack the Adreno 320 GPU. Although this chip will lack the integrated LTE connectivity, an overall performance enhancement of 40 per cent is expected when compared to the S4 Pro chip.

Jacobs emphasised the importance of the mobile market, claiming that devices are at the centre of everything Qualcomm does.

"Almost a million new smartphone users are added everyday. That's more than the double the number of babies born worldwide (371k). Mobile is fuelling economic growth, its transforming industries and redefining the way that we live."

Snapdragon processors are currently found in over 500 devices, and Jacobs noted that there are 400 more in the works.

Devices with Snapdragon 600 are expected to start shipping in the second quarter and the 800 series is expected to be seen in mid-2013.