Windows continues to be the talk of the show despite Microsoft's absence. 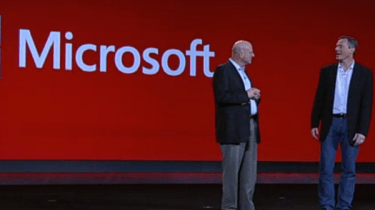 Microsoft CEO Steve Ballmer provided the surprise moment of CES 2013 so far when he burst on stage during a presentation by Qualcomm chief Paul Jacobs.

The Microsoft CEO provided a short cameo to promote the Windows RT and Windows Phone devices powered by Qualcomm chips, and also gave an update on these platforms.

Windows tablets are the only tablets in the world with Office.

Despite getting off to a slow start, the Windows Store appears to be gaining momentum and now has a total of 17,367 apps. This is still behind Android and iOS which have hundreds of thousands available.

"There are now 4x the number of applications than we had on launch. [There were] 10,000 apps added in the last month alone," he told attendees.

Despite the lack of legacy application support, Ballmer claimed the hybrid devices running Windows RT, such as the Samsung Ativ, are able to fulfil the requirements of business users.

Interestingly, Ballmer emphatically declared that, "Windows tablets are the only tablets in the world with Office."

There have been rumours that Office for iPad is due to launch imminently, but with Office being one of the key differentiates between newly-launched Windows RT devices and the iPad, it appears Microsoft is keen to hold onto this advantage for as long as possible.

Meanwhile, on the topic of Windows Phones, Ballmer didn't provide any concrete figures, but suggested the OS is gaining traction in the market.

"In November we reported that sales of Windows Phones were 4x greater than during the same time in 2011. During the week of Christmas we were running at 5x the number [on the previous year]," he added.

With Microsoft keen to make an impact in the mobile market and Intel shunning the Windows Phone OS in favour of Android, Redmond is relying on Qualcomm as its main partner in the smartphone space.

This has been the first year Microsoft has not given a keynote at CES. Ironically, this year is being dominated by products running the Windows RT and Windows 8 OS, so its unsurprising that Ballmer made an appearance to capitalise on this.