Lenovo combines tablet and laptop for its first hybrid ThinkPad - does the Twist offer the best of both worlds for businesses? 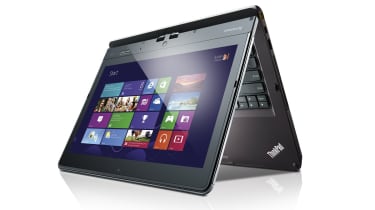 Almost every laptop manufacturer has marked the release of Windows 8 by unveiling its own "hybrid" device, and Lenovo has some of the most high-profile.

The latest ThinkPad is the "Twist", and Lenovo hasn't strayed too far from the designs we've seen in several generations of convertible machines: the screen sits on a central hinge, and can be spun around and flattened to the keyboard. It's not as imaginative a mechanism as some other hybrids - Lenovo's own Yoga 13, for instance, flips its screen over with a full-length hinge - but it's just as versatile as flashier rivals.

Whether it's used in laptop or tablet modes, the Twist looks like a classic ThinkPad. The entire machine is coated in matte black magnesium alloy and plastic, and the base exhibits several familiar traits. The ThinkPad logo about activity light in the bottom-right corner of the wrist-rest, the trackpoint in the middle of the keyboard, and the set of colour-coded buttons between keyboard and trackpad.

Although the Twists look like a traditional ThinkPad, the plastic construction isn't as sturdy as a laptop, with flex to be found in the screen, base and wrist-rest. It's not a disaster - the Twist should still stand up to the stresses of office use - and at least Lenovo has crammed its hybrid machine into Intel's Ultrabook specification: its 1.57kg weight and 20mm girth are impressive, and ensure that the Twist won't weight down your bag.

On top of the laptop mode, the ThinkPad Twist can be converted into three different positions - tent, tablet and stand mode. The twisting screen isn't the only interesting addition to the latest ThinkPad - there's a touchscreen, too. It's a responsive 12.5in unit, and it provides accurate control across the entirety of Windows 8.

Lenovo has added several thoughtful features, too: a physical Windows button switches between an open app and the Windows 8 Start screen, and there are volume controls and autorotate buttons around the Lenovo's edges.