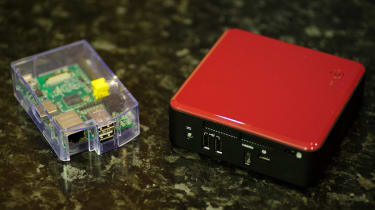 The killer blow for most users is that the Raspberry Pi cannot run Microsoft Windows due to its ARM-based chip. However, there is no shortage of Linux distributions that run on the device and support its various hardware features. Best of all they are all free. 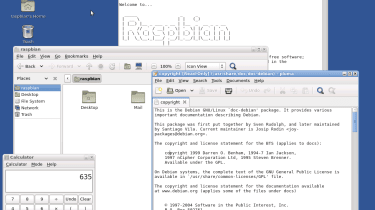 For those that want to do web browsing with Mozilla Firefox or Chromium, playback 720p resolution video and send emails using Thunderbird the Raspberry Pi is fine. We found the Pi showed its hardware weaknesses when a background process had a spike in which it consumed considerable processing power while another task in the foreground was taking place.

Despite its moderate specs, the Pi is well suited to custom projects as can be seen below:

Intel's NUC can run Microsoft's Windows 7 and Windows 8 without any problem. This will make it a massive selling point as it allows legacy apps such as the Office suite to run natively.

Intel's NUC can run Linux and popular distributions such as Canonical's Ubuntu run well out of the box. The Raspberry Pi's weaknesses as a full-blown desktop machine appear when a number of applications are open due to it only possessing 512MB RAM, while the NUC can support up to 16GB RAM. Couple that to the fact that the Raspberry Pi features a single-core 700MHz results in a considerable performance hit when two or more CPU-head processes are run.

Although Intel's NUC has a far more expensive and faster processor, it won't be topping any benchmark tests. Intel's biggest selling point for all its processors against ARM is the ability to run Microsoft's Windows operating system.

By Intel's standards the Core i3 chip in the NUC is low-end, but the system can run demanding applications such as Adobe Photoshop. Running software programs such The Gimp on a Raspberry Pi is an exercise in anger management. Of course the Pi was never designed to run a graphics editing application but that the NUC can do it through hardware and software support is certainly a plus a point.

The Pi struggles when it comes to using heavy duty apps. However, it is able to handle browsing and video playback tasks relatively comfortably.

Intel's NUC is more akin to a traditional PC. It's able to run Microsoft's Windows, which for many is a deal breaker on the Raspberry Pi, no matter what its price. For businesses that rely on Microsoft's Office suite there are few, if any, devices of similar size better suited to such workloads.