The ProLiant DL560 Gen8 is HP’s first eighth generation quad-socket server. In this exclusive review we see if its new Xeon E5-4600 system is the perfect 4P powerhouse for data centres. 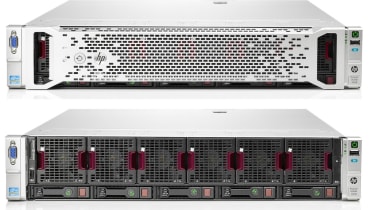 The ProLiant DL560 Gen8 may also be a 2U rack server but it's clearly a different beast to the R820. Storage options are more limited as the DL560 only has room for five SFF hard disks at the front.

HP's thinking here is that most of its customers will be offloading storage to a separate location and really just need the server to have local boot capabilities. If this isn't the case and you want plenty of local storage then the R820 is your best bet as it has room at the front for sixteen SFF drives. 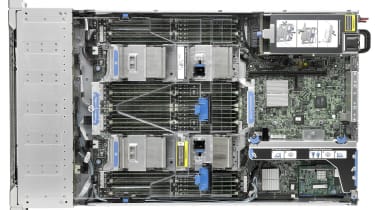 Removing the lid shows HP has opted for a much simpler internal layout with the four CPU sockets mounted on a single motherboard. To squeeze all the extra storage into the R820, Dell has used a 2P system board and a 2P mezzanine card which sits on top and can be removed with a large lever.

HP argues that its design is less likely to cause problems than Dell's mezzanine card pin connectors, which could be a weak spot. Suffice to say the lab's R820 has had its mezzanine card out quite a few times (mainly to show it off) and it's still working fine.

The price for the review system includes a quartet of 2.4GHz E5-4640 modules. These are near the top of this family of eight CPUs and are endowed with eight cores plus a 20MB L3 cache and support an 8GT/sec QPI plus Intel's HyperThreading and Turbo Boost.

The E5-4600 family is designed for scalable dual and glue-less quad-socket platforms so you can cut costs and start off with a 2P system. The E5-4600 Xeons have two QPI links per socket and when you add the extra CPUs they connect with adjacent sockets in a ring architecture. 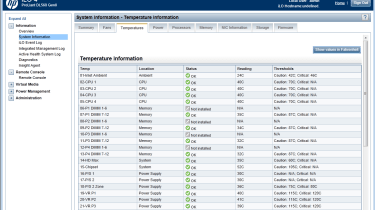 A key feature is memory capacity as a 4P system supports 48 DIMM sockets and scales up to 1.5TB using 32GB quad-ranked LR-DIMMs. You may think the high memory capacity puts them in direct competition with the Xeon E7. However, Intel has positioned the E5-4600 as a better choice where an equal balance of cost, performance, power consumption and memory capacity is required.

The E5-4600 certainly wins out over the Xeon E7 for its low power consumption. With the server's OS in idle, we measured it drawing only 140W and with SiSoft Sandra punishing all 64 logical cores, this peaked at 467W.

Fujitsu's Primergy RX600 S6 and its quartet of 2GHz E7-4850 Xeons pulled a hefty 427W in idle. With SiSoft Sandra running against its 80 logical cores, this peaked at a much higher 760W. 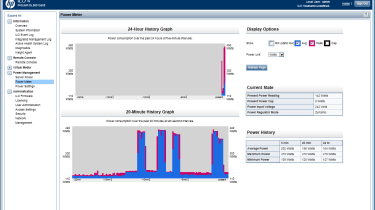