Apple's latest AiO features its Fusion drive, an 5mm-thin design and Intel Ivy Bridge power. Is it still the dream machine for power users or has it fallen behind the likes of the HP Z1? 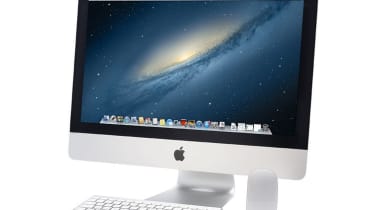 Apple's iMacs have long been the best-looking all-in-one desktops around, but being top of the heap doesn't mean that Cupertino's about to get complacent. The latest iteration of iMac might look the same when it's in front of you on a desk, but design changes make sure it's the slickest Apple desktop yet - and plenty of work has been done in the inside too.

One of the biggest changes comes in the form of storage. The 2012 iMac is the first Apple device to include its Fusion Drive. It's a combination of 128GB SSD and a 1TB, 5,400rpm hard disk, and it's designed to offer the high speeds associated with solid-state storage as well as the high capacity only a hard disk can provide. 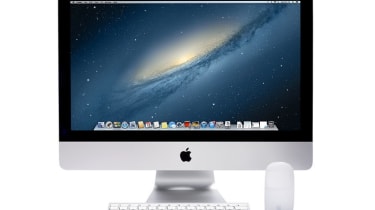 Apple's software manages the Fusion Drive independently. Out of the box, OS X and several key applications - including Safari, iMovie and iCal - are stored on the SSD in order to provide quick system and application response. Newly installed applications are automatically sent to the SSD but OS X analyses which software you use the most. Your favourite applications are kept on the SSD, and rarely-used software is shifted back to the hard disk.

The Fusion Drive's benefits will become obvious with prolonged use, but we can vouch for the raw speed of the underlying hardware. The iMac booted to OS X in just 15s, and the 128GB scored 481MB/s and 330MB/s in AS SSD's sequential read and write benchmarks. That's the kind of speed we're used to seeing from high-end SSDs.

A word of warning: if you're planning to use Boot Camp to run Windows on a Fusion Drive-equipped iMac, you won't benefit from its speed. Boot Camp users are only allowed to create OS partitions from the hard disk portion of the Drive.

In terms of design, the change is obvious. The iMac's edges are impossibly thin. The 25mm edge that's surrounded the iMac since 2007 has been whittled down to just 5mm, with a bulge in the middle of the rear the only clue that this is a computer rather than a stylish monitor.

It's a startling effect - thinner than most screens, let alone all-in-ones - and Apple has had to go back to the drawing board in order to manufacture the new iMac. Apple's old techniques wouldn't get the job done, so it's borrowed a method from the automative and aerospace industries called "friction-stir welding" to join the metal section below the screen to the rear panel. 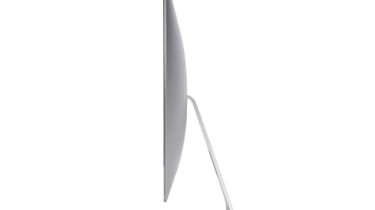 The process works on a molecular level by generating heat through the friction caused by the two plates of aluminium being rubbed together. When the surfaces soften, they're forced together, and the iMac's seamless weld is created.

Elsewhere, there are no major changes to the iMac's recognisable design. It's still the most stylish all-in-one around: a glossy black bezel, familiar Apple logo and curved stand remain the same. Build quality hasn't taken a hit, despite the slimmed-down profile, and the ports are still awkwardly hidden on the rear. There are four USB 3 sockets, two Thunderbolt connectors, a Gigabit Ethernet input and a headphone jack, and the SD card slot - which used to be on the side - is now on the back, too.