The software giant has announced that its new tablet will be available to buy from 9 February in the US, but keeps schtum over UK release. 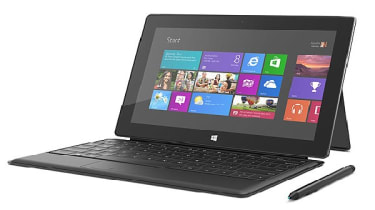 The Surface Windows 8 Pro tablet will go on sale in the US and Canada on 9 February, but Microsoft has stopped short of revealing when UK buyers will get their hands on the device.

The Surface Windows 8 Pro will be available to buy from this date via the Microsoft online and retail stores, as well as Staples and Best Buy in the US.

The tablet will be powered by an Intel Core i5 processor, and is available as a 64GB or 128GB model.

Unlike the Surface RT, whose release coincided with the worldwide rollout of Windows 8 in October, the Surface Pro will be able to run Windows 7 and 8 desktop applications.

We are seeing so much interest in the Surface Pro, if we can't sell it to customers, there could be trouble ahead.

It will also feature a pen-like implement, which will allow users to edit documents and navigate their way round the device using the touchscreen.

The US starting price for the Surface Pro is $899, while the Surface RT retails at around $499. UK availability and pricing is yet to be announced.

According to Microsoft industry watchers, the Surface Pro could provide a shot in the arm for Windows 8 adoption in the enterprise, as interest in the device from business users has reportedly been growing since the RT version dropped last October.

Therefore, the lack of UK pricing and availability details is sure to be frustrating for some, while the firm's network of B2B resellers are also waiting with baited breath to see if they will get to sell the tablet.

Previously, the Surface RT was placed off limits to Microsoft's channel partners, as the software giant opted to sell it directly or through a select number of high street retailers.

Shortly afterwards, Microsoft's limited distribution of the device came under fire, after Microsoft CEO Steve Ballmer suggested the sales strategy was partly to blame for the "modest" number of sales it clocked up.

"[We] are seeing so much interest in this device that, if we are left unable to fulfil this for our customers, it will be perhaps the biggest run-in Microsoft has ever had with its partners," he stated.