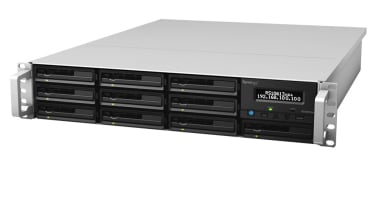 Synology has always had a sharper focus on storage expansion than vendors such as Netgear, Qnap and Thecus and its RS10613xs+ takes this up to the next level. It comes with a pair of external 6Gb/sec SAS interfaces which support up to eight RX1213sas 12-bay disk shelves.

Combine these with the ten bays in the head unit as you can expand up to 106 hard disks and a raw capacity of 424TB. There's more as two 2.5in bays hidden behind the pop out LCD display support SSDs specifically for read caching.

Performance gets a boost with a 3.3GHz Ivy Bridge' Xeon E3-1230V2 CPU partnered by 8GB of DDR memory which can be expanded up to 32GB. Networking is well catered for with four embedded Gigabit ports as standard and the single PCI-e slot supports optional Intel and Emulex 10GbE cards. For testing we popped in an Emulex OCE11102-NM dual-port card which was accepted without any problems. 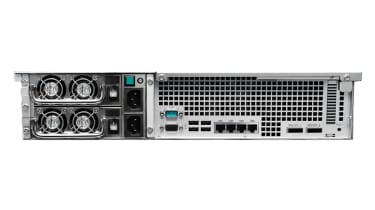 The RS10613xs+ has four Gigabit ports, dual PSUs and two SAS ports for up to eight expansion shelves

Installation doesn't take long as Synology's Assistant finds the appliance on the network, prepares the hard disks and loads the DSM (Disk Station Manager) software from your chosen location. For testing we used a triplet of 4TB WD Enterprise SAS 2 drives and configured them as a RAID-5 array using the web interface's Storage Manager.

We chose a single volume but the Disk Group feature allows you to create multiple volumes within a single RAID array. We also connected an RX1213sas expansion shelf to the main unit which popped up in the Storage Manager window as soon as we plugged both SAS cables in. 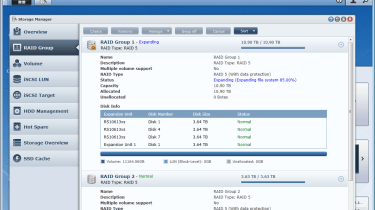 Storage configuration is a cinch and for NAS operations you pick a volume, provide a share name and choose the level of access security to apply. When you create users you can define share access rights, set volume quotas, allow access to specific applications such as FTP and apply upload and download speed restrictions.

IP SANs are also configured from the Storage Manager where you start with LUN creation. During this process you can decide on the parent volume, the LUN size and whether to use thin provisioning. Currently undergoing beta testing, DSM 4.2 will add even more IP SAN features including LUN cloning and 256 snapshots per LUN.

DSM is brimming over with features but Synology allows you to strictly control what extras you want running. Its Package Center provides a handy on-demand service where you can view online all available Synology packages or third-party ones and install each one with a single click. 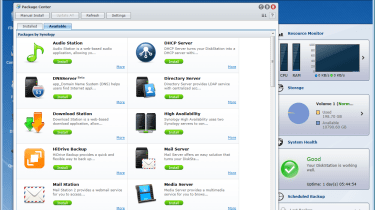 Cloud services get a boost with the new Amazon Glacier package. This new hosted backup service is offered by Amazon as a lower cost alternative to its S3 service where slower access to data is acceptable.

Packages are also available for the Symform backup service and then you have Synology's own cloud file sharing and backup services. The Cloud Station provides a simple syncing service between a user's local folder and a predefined folder on the appliance in the user's home directory.

It supports up to 32 file versions and the DSM interface can be used to view and restore them. A new feature is a single shared folder on the appliance can be synced to multiple Cloud Station users and all traffic encrypted. 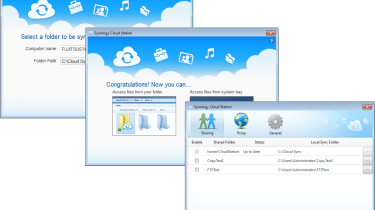 With a direct fibre connection to the appliance, Iometer reported an impressive raw read speed of 735MB/sec for a mapped share. Real world speeds were good as well with a copy of a 2.52GB video clip returning read and write speeds of 234MB/sec.

IP SAN performance was even better with Iometer returning excellent raw read and write speeds of 1030MB/sec and 945MB/sec respectively for a 500GB target. These translated to fast real world copy speeds of 430MB/sec for the test video clip.

We then loaded a fourth 4TB WD SAS drive to the expansion shelf and added it to the RAID-5 array in the main unit. Due to the size of our test drives the expansion took 26 hours to complete but the array and volumes were all available during this phase.

Rerunning our Iometer tests on the expanded array saw no drop in performance showing the SAS connections weren't causing a bottleneck. In fact, with the array now spread over four drives we saw a slight read speed improvement to 1052MB/sec.

Synology's new storage appliance has a lot to offer businesses of all sizes as it won't be beaten for features and is good value. To put this in perspective, a diskless RS10613xs+ costs two grand less than Netgear's new ReadyDATA 5200, is significantly faster over 10GbE and has twice the expansion potential.

If expansion is a key requirement for your network storage the RS10613xs+ won’t disappoint as it has the highest potential in its class. Performance is excellent and it has more features than you can shake a stick at. There’s more to come with the next release of DSM as well.