IBM’s System x3550 M4 rack server combines E5-2600 Xeon power with a new energy efficient design. Its expansion potential also targets businesses looking to start small but get the most from their investment. 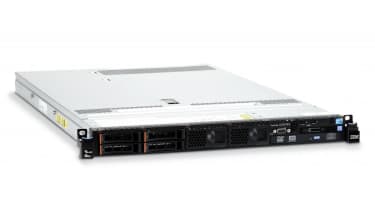 IBM's 1U rack server aims to provide businesses with the perfect balance of power, expansion, value and processing density. It goes head-to-head with HP's ProLiant DL360p Gen8 and we take a look to see if IBM can topple the server which won the IT Pro Editor's Choice award.

Along with support for Intel's E5-2600 Xeons, the x3550 M4 continues IBM's pay-as-you-grow philosophy allowing businesses to start small and expand when demand dictates. The standard models all ship with four SFF SAS/SATA hot-swap bays which can be upgraded to eight SFF drives the same number as the DL360p Gen8.

This is achieved with a kit comprising of a backplane for the four extra bays. It requires an IBM ServeRAID M1115 or M5110 controller fitted in the dedicated PCI-e slot behind the DIMM sockets as only these have a spare four-port SAS connector. Other drive options are three hot-swap LFF bays and a cheaper cold-swap LFF version available as a CTO (configure to order) model.

RAID cache options are extensive with IBM offering standard battery backed up memory and a choice of 512MB or 1GB FBWC (flash backed write cache). The review system includes the 512MB FBWC module which brings in support for RAID-5 as well as mirrors and stripes. 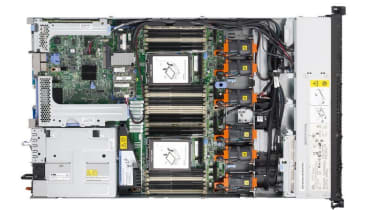 For improved cooling, IBM uses a similar method to Fujitsu's Cool-Safe where round holes in the chassis front panel and hard disk carriers are replaced by a honeycomb so the holes can be more densely packed. It works well as we found the server was quiet during testing.

Cooling is handled by up to six fan modules between the drive backplanes and motherboard. These are hot-swappable but we found the protruding power connector tab on each one made them a little tricky to remove and replace. On lower specified systems with a single CPU the fan count is reduced to four.

Internally, the server is tidy with the two processor sockets flanked by 24 DIMM slots. Supported memory capacities are 64MB of UDIMMs, 384GB of RDIMMs and 768GB of LR-DIMMs.

The price of the review system includes a pair of 2.5GHz E5-2640 Xeons - the fastest of Intel's Standard Xeon E5 family. These 6-core modules have a 15MB L3 cache, a 7.2GT/sec QPI, offer Hyper- Threading plus the standard Turbo Boost and support memory speeds up to 1333MHz. 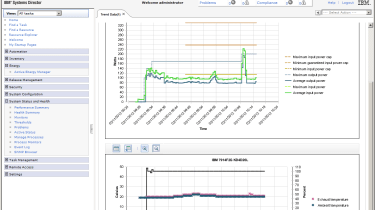