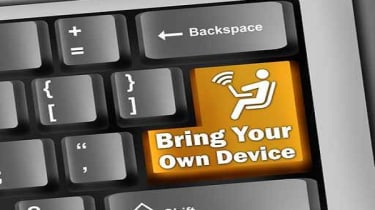 Hall said many workers now expect to send and receive emails out of hours, but claims they're less keen on having access to other line of business applications and services.

"People [at certain levels] within companies have been used to getting a BlackBerry as part of their job package and role, and - with the arrival of all these other mobile devices - it has opened that up [to a wider range of workers]," explained Hall.

People have been using home PCs to access company systems from home for years, and the only difference now is they're doing it on mobile devices.

"The most in-demand application is email...but we're definitely not seeing droves of users pushing to have their ERP systems on their personal devices, for example," he added.

But accommodating an application as seemingly basic and fundamental as email still poses security challenges for IT departments, according to Vile.

"[To manage that], at the very minimum, you want to ensure software policies are enforced to require device locks and that devices are encrypted. HR policies are important as well, to ensure users are aware of the risks their actions pose to the business," he added.

Bring your own disaster?

Tax issues and confusion over who pays for what have both been flagged as areas that could stop BYOD becoming anything more than just a group of workers accessing emails on employee-owned devices.

Pan-European law firm Osborne Clarke had to consider these issues during a recent BYOD pilot, after its staff expressed dissatisfaction with their corporate-issue BlackBerry devices.

The firm's IT director, Nathan Hayes, told IT Pro: "Our way of doing things was not keeping up with people's expectations, and the same question came up time and again, Why can't we do the things we do on our own devices with our corporate devices?'"

"People have been using their home-based desktop computers to access the firm's systems from home for many years, and the only difference now is they're doing it on mobile devices," he added.

However, the company's decision to embrace BYOD has uncovered some hidden costs, particularly around data allowances.

"The problem comes with the switch between BlackBerry and Apple...because BlackBerry devices are very efficient when it comes to data utilisation, whereas the iOS platform is not.

"Once you're connected to 3G or 4G the costs go up, especially when our staff are abroad, so we've had to do a lot of work advising people on data utilisation...on an app-by-app basis," Hayes explained.

This is an issue that's complicated further by staff using their own SIM cards, and in turn their free personal data allowance for corporate tasks and expecting to be reimbursed for it.

"If someone has 1GB of free data a month, there is no practical way of finding out how much of that has been used for work, but if that has contributed to them blowing their allowance for the month, that - understandably - can make them feel uncomfortable," said Hayes.

At this point, Hayes said the logical thing to do is abandon BYOD and give the user a corporate device instead, or instigate a halfway house-type arrangement.

"For instance, the individuals provide the device, and the firm provides SIM card, but this can have tax implications," he explained.

According to HMRC, companies that provide a worker with one mobile phone (or SIM card) do not have to pay tax on that device, but they will if they offer to cover the running costs of an employee-owned phone unless it is strictly used for business calls.

"The tax rules around the provision of mobile phones need to be simplified...to reflect the fact that time has moved on and people are using personal devices for work purposes," said Hayes.

Other experts concur the tax issue definitely needs to be ironed out if BYOD has any hope of taking off.

Softcat's Routledge said he's hoping HMRC will provide some updated guidance on this later in the year, which might allow companies to provide a stipend to employees to cover the cost of devices or make them VAT-free to buy, for example.

"You want to provide your end users with the devices in a cost effective manner, and there may be some tax advantage to make that worth doing, but I haven't seen anything from the Inland Revenue on this, and there really needs to be because it could potentially accelerate the market," he stressed.

Network problems are another area that could lead to BYOD adoption stalling in the enterprise, argued Computacenter's Hall, as the number of workplace devices grows.

"Some workers now have a smartphone, a tablet and a laptop, which could be a mix of personal- and corporate-owned devices, but that's still three more devices in the workplace than there used to be be," he said.

"As a result, some large organisations need to redesign their network infrastructure to accommodate this now, or in some cases - before they can even start to entertain the idea of rolling out mobile devices to their staff."

Many firms still lack wall-to-wall Wi-Fi, which is considered an essential requirement for firms hoping to get maximum value out of a mobile device roll out.

"The ability to deliver this ubiquitous Wi-Fi experience is quite a big hold-up in the enterprise...and we all know that a lot of these devices won't behave the way people want to them to without a constant Wi-Fi connection," added Hall.