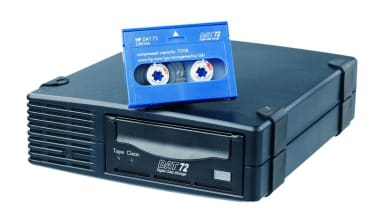 The DDS format had been with us for so long that it came as quite a shock when the developers Sony, HP and Seagate announced in 2001 that it would not be developed beyond DDS-4. At the time DDS enjoyed more than a fifty per cent share of the entry-level tape drive market and the news sent every other manufacturer scrambling to grab a slice of the action.

However, with such a large territory up for grabs it came as no surprise to see HP unable to resist the temptation to re-evaluate the format. On its launch in 2003 it stated that the DAT72 wasn't a knee-jerk reaction but a response to genuine customer demand. That's fair enough but there were good reasons why this format was originally dropped. The compact 4mm cartridges couldn't realistically be improved to provide more storage but HP managed to up the capacity from 20GB to 36GB by modifying the head geometry slightly to improve track density and making the tape medium thinner allowing its length to be increased to 170 metres. You may also be wondering why this generation can't be called DDS-5 - the reason is that Sony co-owns the DDS logo and wouldn't let HP use it.

Don't expect any major improvements to performance as the DAT72 was, and still is, the only tape drive we've seen to introduce a new generation but not offer a worthwhile performance boost. Consequently, native transfer rates are virtually the same as for the old DDS-4 and stand at a pedestrian 3.2MB/sec. The performance tests verified this with ARCserve reporting a modest 3.6MB/sec for backup and verification, increasing slightly to 3.8MB/sec during data restoration.

The external drive on test is built to the typically high standards we've come to expect from HP. The casing is made of solid plastic and the loading slot has a small flap to protect against dust. At the rear you have a pair of SCSI ports accompanied by a SCSI ID selector and the case incorporates a small fan that runs quietly.

A mark of reliable tape formats are those with a good history and a committed development process ahead of them. And on that front the DAT72 looks a good bet. There's no doubting the format's long and established history, and HP is working on a successor to it. The DAT160, expected to be released early in 2006, is expected to be launched later this year.

With server storage capacity increasing exponentially, however, the current performance level of this format the is just too limiting for us to contemplate recommending it - even the modest 9GB of test data took nearly three quarters of an hour to backup. It's also comparatively expensive.