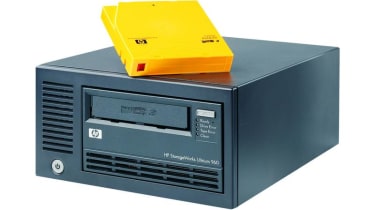 There's no denying the LTO format has delivered on every promise so far and that LTO-3 is currently the fastest on the market. This particular drive is the main reason we elected to use a separate fibre channel (FC) disk array as it was the only way to allow it to stream properly. The quite stunning native transfer rate of 80MB/sec is never going to be achieved when backing up from a local disk drive and to prove this we also ran tests on the server's local storage sub-system.

Running the performance tests using data on the FC array saw ARCserve report an amazing 79.3MB/sec for backup. The disk to tape verification and data restoration tasks were also impressive with these returning 72.5MB/sec and 69.4MB/sec respectively. Backing up the test data from a local hard disk saw these speeds drop by nearly 20 per cent. However, even here the backup speeds are still faster than Quantum's new DLT-S4 which has a native transfer rate of 60MB/sec.

Storage is extremely good as the solid LTO-3 cartridges offer a native capacity of 400GB while backward compatibility extends to reading both LTO-2 and LTO-1 cartridges and writing to LTO-2. As defined in the LTO specification the drive incorporates many of the best features found across a wide range of formats. Based on 1/2in linear recording technology the drive uses a thin film/magneto resistive head and the media is held in a single reel cartridge that borrows many features from DLT (digital linear tape) in its quest to provide a stable tape path at high speed. In keeping with current data archiving regulatory demands WORM (write once read many) also comes into the picture. HP uses the 4KB Flash memory chip built in to all LTO cartridges to stop data being overwritten. However, because the WORM cartridges have their servo tracks encoded differently, you still have to pay extra for them - they're a whopping 79 each.

Performance improvements over LTO-2 are made possible with the introduction of a new 16-channel head along with changes in track and bit density plus a slight increase in tape length. The drive employs a closed loop servo control similar to that used by Tandberg Data's SLR and IBM's Magstar tape drives. A dual servo system controls the vertical location of the read-write head to ensure it stays on track in the event of tape wander. IBM's Magstar technology gets another mention as the LTO cartridges incorporate its cartridge reel gear and reel lock mechanisms and last, but certainly not least, DDS technology provides the basis for the LTO's error detection and correction code (ECC).

The superb performance combined with high capacity makes HP's StorageWorks Ultrium 960 an ideal choice for businesses faced with rapidly decreasing windows of opportunity for backup. The LTO format has delivered on every promise so far and there's still a fourth generation in the product roadmap to look forward to.