Tape is always likely to play a role in any storage management policy, because it's cheap and robust. Dave Mitchell takes a look at eight of the latest drives and sorts the wheat from the chaff 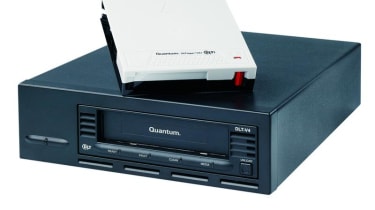 With its latest drive, Quantum is another manufacturer with its eyes firmly focused on the DDS and DAT72 market. It's a format that has been around in one form or another since 1999 and the first generation product - DLT1 - which was originally introduced by Benchmark Systems was aimed at providing far greater performance than DDS-4 but at a similar price.

The format was then re-branded as the ValuSmart VS80 which delivered the same package in a half-height form factor and it took a further four years before the next generation VS-160 was launched. With Quantum now at the helm the third member of the family - the DLT-V4 - has made an appearance earlier than expected.

It brings with it a doubling in native capacity over VS-160 to a healthy 160GB and, usefully, the new drive uses the same DLT-VS1 cartridges as its predecessor. Unfortunately, performance doesn't get much of a boost as this only sees a 25 per cent increase to a modest 10MB/sec. Quantum has achieved these improvements by increasing the number of tracks from 240 to 352 and the recording density from 175Kb/inch to 219Kb/inch. We asked Quantum why the speed improvement wasn't greater. The response was that the key priority with its backup drives was storage capacity, not performance.

Another noteworthy point is that though the drive is backwards compatible, it can only read DLT-VS1 and tapes created on the earlier drives in the family and not DLT tapes created by other drives.

The drive comes with two connection options - Sata and Ultra 160 SCSI - and we took a look at the external SCSI model. I's certainly very well built and the half-height form factor of the drive makes for a very compact unit. It performed well in our speed tests too, exceeding its quoted native transfer rate in every test. Under ARCserve it returned 14.6MB/sec for the backup task, 14.5MB/sec for the verification run and 13.7MB/sec for data restoration. As with the SDLT600, the drive delivers WORM capabilities and also comes bundled with Quantum's DLTSage xTalk utility which brings into play its DLTice technology.

The main utility provides a complete diagnostics toolbox that can run a barrage of tests on the drive while the second is Quantum's response to the demands for standards-based data archiving facilities. To turn a cartridge into WORM media you select the DLTice option from the main menu. It then writes a unique tamper-proof electronic key to the tape which prevents it from being overwritten. The really handy thing here is that the drive can use standard DLT-VS1 cartridges for WORM duties - you don't have to splash out extra as you do with some other systems.

It's disappointing to see the DLT-V4 only introducing a minor improvement to native performance over VS-160 but it does meet and exceed the quoted speeds. And that, combined with high storage capacity and a relatively low cost per gigabyte, means Quantum's latest backup baby is worth a look for smaller businesses.