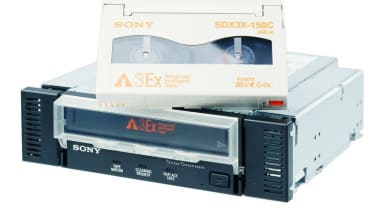 Sony's AIT format has been around longer than virtually all other backup tape formats but is unique in that not only have six generations always been on the drawing board but that each has so far been delivered on time.

However, it has not always been plain sailing for Sony's backup division and its latest drive - the StorStation AIT390s - has been introduced to cover for a cock-up the company made when it introduced its AIT-4 based StorStation. Although AIT-4 offered performance and capacity to rival LTO-2, Sony had to withdraw all claims of backward compatibility. The reason for this was the drive heads could be damaged when using AIT-1, -2 or -3 media in it and Sony couldn't guarantee 100 per cent reliability.

The AIT390s aims to provide backwards compatibility with previous generations and around August this year Sony plans to make AIT-4 drives compatible with this format as well. Essentially, this level of compatibility allows Sony to provide a bridge to AIT-4 and the fifth generation AIT-5 which is due to be launched at the end of this year. At the moment, though, the AIT390s' backwards compatibility only extends to reading and writing to standard AIT-3 media and reading AIT-2 and AIT-1 tapes. Compatibility with AIT Turbo media will also not be introduced until August.

Sony has pitched the AIT390s at the VXA-3 and DLT-V4 formats and its quoted native performance of 18MB/sec puts it ahead in the speed stakes. The drive uses Sony's ADLC (adaptive lossless data compression) which gives a higher compression ratio of 2.6:1 allowing it to offer a maximum compressed capacity of 390GB and a top performance of 46.8MB/sec. However, don't get too excited as most data found on the average SMB server can't be compressed to this level.

Helical scanning is the preferred recording technology and the StorStation uses compact 8mm AME (advanced metal evaporated) tapes. These offer a feature called MIC (memory in cartridge) which consists of an internal 64Kbit flash memory chip. The main function of MIC is to reduce the time spent searching for data as it stores information that is normally found on the first segments of the tape. It is also used to provide as a WORM (write once read many) features in an attempt to offer a more cost-effective alternative to optical solutions for data archiving. In this case MIC is used to prevent cartridges from being formatted, overwritten and data from being deleted, while allowing new data to be appended to any unused parts of the tape.

The AIT390s offers a strong alternative to both DLT-V4 and VXA-3 formats with better performance and more storage capacity. However, the fact that this drive was only introduced to remedy a flaw in AIT-4 drives makes us slightly nervous and we would advise waiting until it has established its credentials before taking the plunge.

A good turn of speed and high capacity but this drive is essentially a stop-gap measure to overcome the media incompatibility issues with AIT-4, and that's probably not a great thing for your long term storage policy