With an eye firmly fixed on the DDS and DAT72 market, Sony's StorStation AITi200STS lays claim to being the first tape drive on the market to deliver support for the SATA (Serial ATA) interface 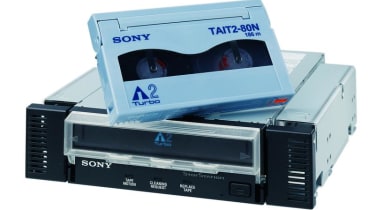 With an eye firmly fixed on the DDS and DAT72 market, Sony's StorStation AITi200STS lays claim to being the first tape drive on the market to deliver support for the SATA (Serial ATA) interface. This is now making more sense at the small business backup level than SCSI which is proving to be an expensive option. It's also a more natural partner for entry-level servers as the majority now have motherboards with embedded SATA controllers as standard, so no extra costs will be incurred in buying an interface card.

This AIT-Turbo 2drive certainly delivers strong competition to DAT72. Its native transfer rate of 12MB/sec is four times faster and the native capacity of 80GB is over twice as much. It uses Sony's ADLC (adaptive lossless data compression) to give a higher compression ratio of 2.6:1 but as with AIT390 drives you're unlikely to see the majority of business data being compressed to this level.

It uses the same compact 8mm AME (advanced metal evaporated) cartridges as its other AIT compatriots and for this drive Sony offers two versions. Costing around 39 each the TAIT2-80C cartridges come with the embedded MIC (memory in cartridge) feature which consists of an internal 64Kbit flash memory chip. This was originally designed to speed up search times by storing basic information about the data on the tape. However, it now gets called into action for WORM functions as the chip can be used to prevent cartridges being formatted or overwritten and data from being deleted. Smaller businesses that have no need for regulatory compliant data archiving can save some cash as non-MIC cartridges cost around 14 less.

The drive is easy enough to install and ARCserve had no problems working with it. However, it is very important that you check which mode the system's IDE channel has been set to by Windows. If it's left in the default PIO mode you'll see performance take a massive hit of up to 75 per cent so you need to ensure the channel is set to DMA mode. As this is such an important requirement we were surprised that Sony's product manual makes no mention of it.

With this problem resolved we saw the AITi200STS deliver some impressive results in the performance tests. For backup ARCserve reported a speedy 14.1MB/sec average transfer rate which increased slightly to 14.2MB for data verification. Only during the data restore test did speed drop noticeably with the drive averaging out at 9.6MB/sec.

At this level of the backup market the longer HP delays launching the successor to DAT72 the more market share the format is likely to lose. And with alternatives such as the AITi200STS, which boasts improved performance, bigger capacity and support for WORM functions, the argument to switch is becoming more and more convincing.