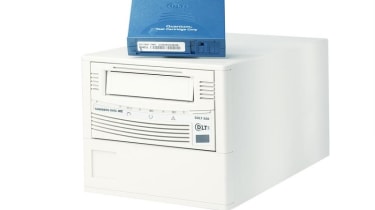 The SDLT format has had an interesting history with the first three generations being launched by manufacturer Quantum in a comparatively short time period. The original SDLT220 appeared in 2001, the SDLT320 materialised less than a year later and this was followed by the SDLT600 the following year in 2003.

A key feature of the SDLT600 is Quantum's laser guided magnetic recording (LGMR) technology. Traditionally, the servo tracks used for media positioning have always been placed on the same side of the tape used to record data. More tracks means higher capacity so, to free up more surface area, Quantum opted to laser etch the servo tracks on the back of the tape. Tracking is carried out by a pivoting optical servo (POS) system which incorporates an improved PRML channel and magneto resistive cluster heads.

To help businesses out with regulations on data archiving the SDLT600 comes with Quantum's DLTIce technology. It's a simple solution that is provided as part of Quantum's DLTSage xTalk tape diagnostics toolbox. This writes a unique tamper-proof electronic key to tapes selected for WORM duties which ensures that the tape is non-erasable and non-rewriteable - data can be appended but the tape contents cannot be altered. A big advantage of the Quantum method is that standard Super DLTtape II cartridges can be used as WORM media. HP's LTO solutions require you to purchase special cartridges for WORM duties. This also applies to Sony's AIT format which uses the cartridge's memory chip to stop its contents being changed.

The process of turning a tape into WORM media is very simple. All you do is load a cartridge and select the DLTIce option which writes the key to the tape. To use WORM cartridges in ARCserve the tape must be designated WORM media using xTalk and then formatted from within ARCserve before being used. Only after these steps will it appear as WORM media to ARCserve and if you attempt to format the media a second time it will stop you with a warning message advising that data is present. Performance-wise the SDLT600 acquitted itself extremely well. Its quoted native speed of 36MB/sec was beaten soundly in the backup test with ARCserve reporting an average speed of 45.3MB/sec. Verification and restoration tasks were also completed swiftly returning an impressive 43.3MB/sec and 34.5MB/sec respectively.

The SDLT format offers strong competition to LTO with the SDLT600 delivering impressive speeds and capacities. Companies already investing in the format will be pleased to know that the fourth generation DLT-S4 is due out very soon which offers a performance boost to 60MB/sec. We would still advise anyone looking for a new backup format to implement to consider LTO first, however, as it offers an equally solid upgrade path and higher overall performance.