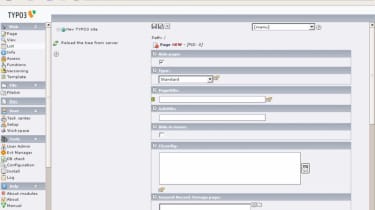 Typo3 is Danish in origin, and very popular in mainland Europe. Around 4800 example sites are listed on the website, to give an idea of just how popular. It has been around since 1998, and in that time has gathered enough functionality to present itself as a content management 'platform'. This long history, wide usage, extensive feature set, plus a lot of positive reviews on the Internet, meant my expectations of it were high.

I was immediately put off by an overly complex installation, however. You have to download and install two packages, the base and a site skeleton (there used to be a quick start tutorial site, but this seems to have disappeared). The basic installer is simple but isn't self-contained and is prone to generating rather unhelpful error messages if things don't go perfectly.

Once in, first impressions are that the administrator interface looks dated. That's not the biggest problem, though - it's also completely unintuitive. It's easy to get lost and, even after reading the poor online documentation simple jobs like adding pages is still not the easiest task. This is done by selecting the site, going to the List view, then clicking on the Create new record link. Not the Add page link, which you might expect to be the case...

I'm sure this is because of the extreme power and flexibility of the system, but compared to Drupal, which has similar functionality but is far more elegant, Typo3 was a tangled, frame-based nightmare. Templates are equally difficult to implement. In fact almost every task attempted using Typo3 is hampered by inconsistent interface design and tiny, barely-readable icons.

Even for those used to the idiosyncrasies that often afflict open source software the sheer complexity of using this system is likely to prove a major stumbling block. On top of this, Typo3 puts another barrier in front of developers: to write templates, you have to use a language called Typoscript. This is effectively a language which cannot be used in any context other than Typo3 templates - not a great investment of a developer's time.

On the plus side, the Typo3 feature set is certainly impressive, including common features like a WYSIWYG editor, plus functionality to support wikis, blogs, forums and the like. There are more advanced features such as a fine-grained permissions system and integration with a wide range of authentication systems (eg LDAP). In addition, a large number of firms offer professional support for the product (though only one UK firm is listed), and there is an associated non-profit Typo3 Association, which should ensure the project's sustainability.

Despite all of this, we cannot recommend Typo3. We were surprised at how unusable the system is, given its wide usage and long pedigree. It would require a good amount of work to get to grips with, energy which would be better expended on learning another system.

A complex and unintuitive system, which offers little over the other systems reviewed here