Part consultancy, part hosted solution provider, the company will work with most things you can throw at it 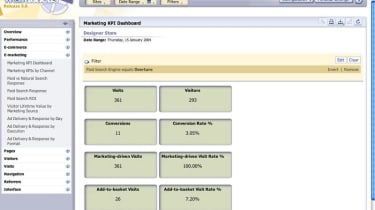 WebAbacus, which is part of Foviance, an alliance with The Usability Company, offers many different web analytics options for customers.

By preference, its products work using embedded JavaScript tags that make image calls to a tracking server hosted either in-house or off-site on WebAbacus's servers. They are, however, willing to analyse web log data, deal with data from Clickstream's tracking system and to come up with other solutions, depending upon the individual client needs. The JavaScript tags can be customised to grab data they might not usually ask for, such as mouse-overs, while for more advanced needs - tracking event information in Flash movies, for instance - WebAbacus can provide ActionScript tracking code as "well."

Whatever tracking method you choose you'll get access to a web-based report system. This worked well no matter the browser we used to access it although the reports were sent unencrypted, which presents a slight security issue. Report compilation and display was fast too, even on lower spec machines.

The range of reports and dashboards available is as impressive as you'd expect in a version 5.0 product, with a particularly good range under e-marketing and e-commerce. While the standard graphing and charting functions used didn't render particularly attractive displays, reports remain readable in most situations, although a text-wrap function might be useful in some instances. There's also an extensive range of alternative charts available within the preferences system and the option of using a Java-based applet for charting although that gave no special benefits, produced almost identical charts and slowed down performance. The one exception was the click path analysis tool, which put the other services tested to shame.

A drill-down feature in some charts, which allowed access to raw data was particularly welcome, particularly compared to supposedly user-friendly solutions that don't give access to the data from which results have been aggregated. Export options are CSV and RTF.

Of some interest was a user-friendly customisation tool that remembers what each user's preferences are for the reports, something that saves considerable time when multiple users are using the system. It's something we'd have liked to have seen extended to the reports list as well.

Unlike OneStat, WebAnalytics was both easy to use with ad services and unlike Google Analytics, was more than happy to deal with other campaign vendors such as Overture.

Probably the best feature of the service, however, was the customisability of reports. For most users, a simple filter system that gives access to common fields and filtering options via pull-down menus is more than adequate and more advanced than many other services. These filters can be saved and used for later occasions as well, making them a powerful tool when used correctly.

However, the reports themselves are also fully customisable. Each report carries security settings to decide which users can access them, and users can assemble fields and arithmetic operators together in almost unlimited combinations until the reports reflect the information they need.

WebAnalytics is an advanced, flexible solution for any business. While it takes some setting up to get its full benefits, this is easier than with many other systems and produces far better results.