US-based Nextstat is a low-key player in the market 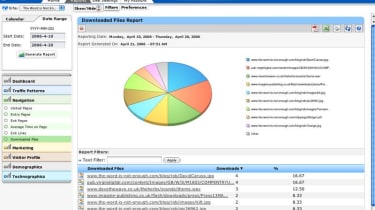 The US-based Nextstat is a low-key player in the market, mainly pitching its services to smaller and medium-sized enterprises. It has a three-tiered hosted solution: the free Webstat Basic; Webstat Premium, which costs $9.95 per month; and Nextstat 4.0, which costs $59.95 per month.

While the Webstat Premium service does have many features that might be useful for those with only a slight interest in web analytics, there are still plenty of omissions, such as conversion analysis, search engine reporting by keyword and click path analysis, that make it unsuitable for most enterprises. Nextstat 4.0 fills in all of those blanks, however - for a price.

As with many of the other services, Nextstat uses JavaScript code inserted into tracked pages to study visitor behaviour. This code can be varied from page to page to customise how the page appears in the eventual reports. Additional code is also available for campaign tracking although the link-based alternative will be more attractive to most companies. Unfortunately, Nextstat's server response times are quite slow, making load times for tracked pages far longer than they should be for UK-based clients. While this does mean final page-load delays for tracked pages, page display times were unaffected, making this a minor issue for the most part.

Equally unfortunately for a hosted service, those server response times were just as poor for the Nextstat reporting tools, making it almost unusable at times. There seemed to be some variance in these delays according to the time of day, suggesting that some of the problem is an Internet traffic related issue. Analysis early in the morning would seem to be the best option with Nextstat.

The reports themselves are accessible via any browser and were probably the most user-friendly of all the services we tested. Onscreen help is good, giving detailed explanations at each point of what each report and screen represented and the ability to toggle between page name and URL in charts was useful in many instances. Report customisation, however, is non-existent although there are some filtering options available. Again, these were far more user-friendly than other services' filters. Export options are PDF and Excel/CSV format.

They may be easy to use but the range of reports is not especially extensive and is actually inferior to even those generated by Google Analytics. Summary reports were too sketchy and too information-light to be of any real use. Campaign and commerce tracking (new to Nextstat 4.0) are not especially mature. And although conversion tracking is possible, there are no funnel definition options. Instead, you define a single destination page as the conversion goal and any visitor that reaches that page is regarded as a conversion.

Search engine marketing reports were better, although none of them provided any insight into anything other than organic search, instead relying on the campaign tracking system and manual work to provide any insight. But the lack of click path analysis is a glaring oversight.

Given Nextstat's background, however, it's not unexpected that the site design reports are better. Geographic tracking is better than most other services too, offering better drill-down with more information and accuracy. And the JavaScript used is smart enough to track which files are being downloaded from pages, something that none of the other services offered.

All in all, then, a mixed offering which excels in some areas but has gaping holes in others.

Over-priced and under-powered, but better than some of the competition