Simple to install, but once up and running it's extremely easy to use 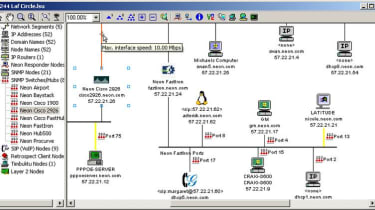 After Novell's super-comprehensive Zenworks package with its multiple modules and many CDs, Lansurveyor 9.5 - on a single CD - comes as a breath of fresh air.

Not only is it simple to install, but once up and running it's extremely easy to use and we had mapped out our test network within minutes of the product asking us which segment we wanted to scan. The software does this via Ping, Netbios and SNMP requests.

The product is organised into three components or modules. The first and principal constituent is the main console, which gives an overview of how devices and nodes on the network infrastructure are mapped out. Once we had scanned our test system we were able to drill down on specific parts of the network and unearth information on each node. The network map can by saved as a Visio or JPEG file as well.

The second module is the so-called Neon Responder - an optional component, installed on the systems that need to be monitored, that draws detailed information on a device's hardware and software and records it to a Microsoft SQL Server or MSDE database. This remote deployment tool has to be installed onto Windows or Mac OS X client machines in order to unearth this information about the computer.

The third component, Continuous Scan, acts as an intrusion detection system. Using the baseline map of the network it scans for changes on the network (surprise, surprise) on a continuous basis. This means that rogue devices, such as wireless access points installed by users, can be barred from connection to the network until they are placed on a white list and allowed access. This is achieved in conjunction with managed switches on the network and is a reasonably cheap way for small companies to include endpoint security within their infrastructure.

In addition to all of the above there's also a polling feature thrown in. This will scan critical ports on target machines and alert the administrator when an application stops responding (such as a web, mail or DNS server). We tested it by setting it to monitor a remote server which we set to go offline after five minutes. As expected the product duly notified us that the remote server could no longer be contacted.