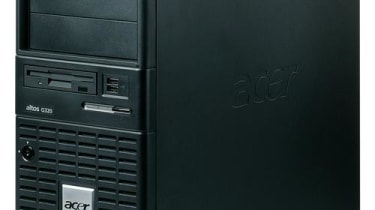 Acer manufactures a massive range of consumer products, from optical drives to motherboards and graphics cards, even desktop PCs. As maker of PC components it is one of the most recognisable manufacturers around and it claims to be the world's third largest PC manufacturer. But it is less well known for its more business-centric products, in particular its servers, which until a couple of years ago were not very heavily promoted.

Nowadays, it's a different matter, and the company's Altos range of servers will be on many IT managers' shopping lists. The G320 sits on the first rung of the Altos ladder and aims to deliver an affordable solution to SMBs on a tight budget. At a mere 449 we can't argue with that philosophy but what sacrifices have been made to achieve this low price point? Certainly none in the processor department as the G320 sports a 3GHz dual-core Pentium D module. There's no skimping with the motherboard either. Acer has selected an Intel model that is specifically designed for server operations. It's a popular choice amongst many of the Tier 2 server vendors as it offers a good range of features, including support for Pentium 4 and D processors.

Inside, the G320 is a little on the scruffy side with IDE and floppy ribbon cables dangling in front of the drive bays and not secured in place. For storage the chassis supports fixed hard disks but along with the supplied 80GB Hitachi drive there's room for three more inside and all the SATA power connectors are ready and waiting. The motherboard provides four 3Gbps SATA sockets and the controller also incorporates basic RAID functions for mirrored or striped arrays. We were advised by Acer that it is soon to launch a new model with a pair of 250GB SATA drives costing a mere 479.

Server management duties are managed by Acer's ASM (Acer Server manager) package, though this is actually just a re-branded and slightly redesigned version of Intel's Server Manager - the same as supplied by Evesham with its 500EP system. We have seen Acer's original management software before and can say that this Intel alternative is a better choice as its browser front end is better designed, provides more system information and has superior alerting facilities.

One concern we had was with internal cooling as it simply didn't appear to working well. A funnel shaped shroud with integral fan is attached to the processor's heatsink and another fan is mounted at the rear of the chassis. The latter sucks instead of blows and is designed to push air at the processor after which the funnel vents it out the side panel. However, when we powered the server up the baseboard temperature warning went off as it was sitting just above the predefined threshold and wouldn't drop down. The Acer's case wasn't helped either by the bright spark at its factory who disabled dual processor support in the BIOS prior to delivery ensuring that both cores of the Pentium D wouldn't be identified.

With such a low price tag the Altos G320 looks like a bargain but sacrifices have been made to achieve this. Its cooling arrangement doesn't seem to work that well, build quality isn't great and the interior on the server supplied to us for review wasn't particularly tidily presented either. We'd recommend you save up your pennies and plump for something pricier, but safer.