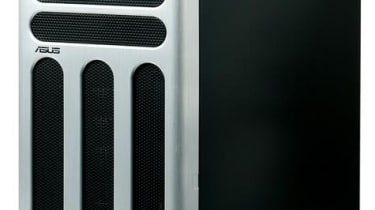 For years Asus has limited its interest in the UK technology market to consumer products and PC components. It has always had a range of servers in its product line up, but it hasn't seen fit to sell these to UK customers before. Now, however, things are changing and the TS300-E3 is one of the firm's first servers to touch down in good old Blighty.

First impressions are good and it looks to offer a solid specification at a sensible price. The server employs Asus' P5MT motherboard which is equipped with a speedy dual-core 3.2GHz Pentium D processor and partnered by a generous 2GB of memory.

The TS300-E3 is reasonably well constructed and though the sleek brushed aluminium front panel is somewhat flimsy it is at least key-lockable to prevent access to the device bays behind. And there are plenty of bays too, with three of the 5.25in variety and a hard disk cage below with room for up to four drives in hot-swap carriers. RAID is handled by an embedded LSI Logic chip and this supports RAID-0, -1 and -10 arrays. Initially, there looks as though there is room for another cage underneath this too but the panel is there purely to facilitate air flow through the chassis.

Inside the case, the layout is nice and tidy with all cables clipped up out of harm's way for easy access to the motherboard and components. The cooling arrangement is quite unusual: the processor has a large active heatsink, attached to which is a plastic tube that vents air out through the side panel grill. The hard disk bay is well cared for too with a big blower fan mounted on the cage and a large fan at the rear of the chassis. You'd think this arrangement would be quite noisy but it isn't. This server is one if the quieter systems in this test.

The server is well endowed with network connections, too. There's a pair of Broadcom Gigabit Ethernet ports and the bundled Advanced Control Suite software allows these to be teamed together. A good selection of expansion slots is provided, although two slot locations have been taken over by a vertical mini-PCI slot that accepts Asus' optional ASMB2 IPMI controller which offers out-of-band management.

Even without this the management picture looks rosy with Asus's ASWM (Asus System Web-based Management) utility supplied as standard. This provides local and remote browser-based access to the server and also supports encrypted SSL connections. It opens with a system summary view and offers quick access to all key components: values for fans, voltages and temperatures can be monitored, hard disks and their storage status can be kept on top, while CPU and memory utilisation are represented in neat graphs. Applying thresholds to many of these values brings into play extensive alert notifications too, with the ability to send out emails, SNMP traps, broadcasts and calls to pagers. The only fly in the ointment on the management front is the Mylex GAM utility that manages the RAID array, which is looking very old now and doesn't offer any alerting facilities.

So, management facilities are a mixed bag but overall the TS300-E3 represents a good value starter server which delivers a decent specification with plenty of room to expand.