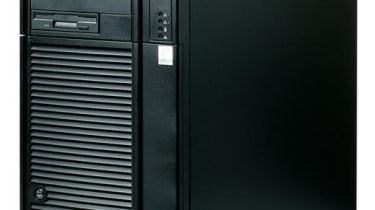 In contrast to the bargain basement offering submitted buy Acer and HP, Evesham has decided to use every penny of its allowance in the search for the best possible hardware package. And it certainly looks to have achieved this; the 500EP delivers a pair of 2.8GHz Xeon processors, 1GB of memory and a very interesting storage proposition for the money.

Evesham has always favoured Intel's all-in-one packages and the 500EP is no exception. The chip giant's SC5275-E chassis and SE7320EP2 motherboard provide the building blocks on which this server is built. And though Intel classes the chassis as "entry-level", it still manages to deliver impressive expansion potential and decent build quality. Along with the DVD drive there's room for another 5.25in device in the front panel and beneath is a large hard disk cage with enough space for six drives, all fitted in hot-swap carriers.

The motherboard only sports a pair of IDE ports so to manage the hard disk backplane Evesham has plumped for an LSI Logic MegaRAID 6-port SATA RAID controller which offers RAID-0, -1, -10, -5 and -50 arrays plus hot-swap and hot-standby. You get a couple of 160GB drives connected to this and Evesham has cabled all six ports on the controller to the backplane so adding more drives won't require the server to be opened up.

The 500EP presents a very tidy interior with the two processors located behind the drive cage and both equipped with active copper heatsinks. The cage has its own radial fan and there's another at the rear to shunt air from the chassis. All are variable speed but they're not quiet and result in a system that will be more than a little obtrusive in a small office. Despite the RAID card there's room for expansion too, with a choice of PCI, PCI-X and PCI Express slots, plus a pair of integrated Gigabit Ethernet ports.

There's more Intel involvement on the management and monitoring front with its Server Manager 8.40 software included in the box. The motherboard has plenty of sensors and the software provides a rundown on areas such as chassis and processor temperatures, system voltages, hard disk space and fan speeds. There's a complete inventory of hardware and many software components and where these are variable values you can configure alert actions for them.

Upper and lower thresholds can be set for the CPU core temperature or cooling fan speeds, for example, and if any of these are breached Server Manager can issue warnings, from pop-up messages and sounds to email; it can even be set to fire up a separate application. The RAID controller is managed separately using the bundled Power Console Plus which is the least impressive of the management tools as LSI hasn't updated it for years. The only thing in can do in the event of an array degradation is set off an audible alarm.

Taken in the context of the system as a whole, however, such niggles don't detract from what is a very tempting proposition. The 500EP is the only system on review to deliver dual Xeons within our price limit and no major sacrifices have been made to achieve this impressive feat.