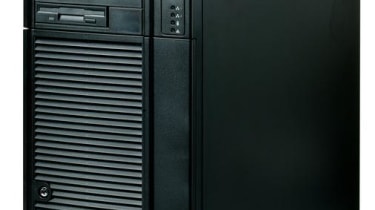 Mesh may not push its server range very heavily on its website, but the number of models on offer, from rack servers to cheap starter boxes proves that it's serious about catering for business IT needs.

The X-Serve 5275 Pro is the more expensive of the firm's two pedestal models. It looks almost identical to Evesham's 500EP, but on closer inspection, the chassis turns out to be an SR5032 from Enlight rather than an Intel box. Overall, though, there really isn't much difference between the two as they both offer good build quality and plenty of room to expand.

A couple of 5.25in bays are provided, with one spare, and beneath these is a large hard disk cage with room for up to six drives in hot-swap carriers. It's here that things get interesting. Mesh has filled five of the bays with 160GB WD Caviar SATA hard disks - that's more storage than any other machine in this test. Even better is the fact that Mesh has included an Intel six-port RAID controller card which comes with 64MB of cache memory and supports RAID-0, -1, -10, -5 and -50 arrays. For the review system these five drives were gathered together in a single RAID-5 array with hot-spare.

To deliver such high storage capacity Mesh has, however, had to make sacrifices on both the processor and memory fronts. The system sports just a single 3GHz Xeon module and, though there is plenty of memory (2GB), it is of the slower PC2700 variety. The Intel SE7320GP2 motherboard isn't as good a choice as the Evesham's SE7320EP2, either. It'll cope with server duties well enough but the 16X PCI Express slot does indicate that it's targeted more at workstation duties. There's also just one Gigabit Ethernet port, where the 500EP offers two which can be teamed together. However, you can add another network card to the X-Serve as there's plenty of room to expand with a good selection of PCI slots still available. It's also worth noting that Intel announced at the end of 2005 that the SP2 and GP2 boards were being discontinued.

With Intel at the helm, there's a good selection of server management tools. Its Server Manager tool provides remote web-based access to any server running an agent, although the bundled version (v8.3) is not the most recent. The RAID controller is managed by a separate web console which provides good levels of access to array monitoring and configuration.

Inside, the X-Serve is supremely well put-together with all cables secured neatly in place. Mesh has also cabled all the RAID card ports to the drive cage hot-swap backplane so that you can add another drive without bringing the server down. Cooling gets plenty of attention too: the single 3GHz Xeon processor is fitted with a very large active heatsink, the disk cage has a dedicated fan and the chassis also has a large fan on its rear panel. Alas, all of those fans mean you'll have to put up with above average noise levels; and although it shouldn't be too obtrusive in a small office you wouldn't want the X-Serve next to your desk.

Mesh is undoubtedly offering a cracking specification for the price here and in terms of competition is closely matched by Evesham's 500EP. Both are very well-built and designed too so in the end it comes down to a matter of priorities. If processing power is paramount, the Evesham is the better choice, but for storage intensive purposes this Mesh is the better bet.