Impressive in PoE terms but otherwise disappointing at this price level 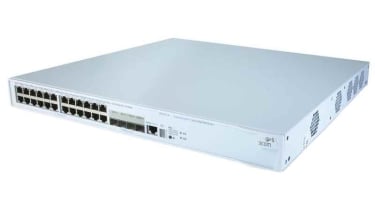 Having given up on enterprise networking for a while 3Com is back in the market with a full product line-up, including a range of stackable switches with 'PWR' at the end of their names.

We looked at the recently enhanced Switch 4500 PWR which, in its light blue casing, is hard to mistake for anything other than a 3Com product. It's rack-mountable, with mounting brackets included as standard, and all of the network ports are arranged on the front panel, although the arrangement here isn't quite as straightforward as it looks.

The adapter slots are there to provide Gigabit uplinks to servers and backbone networks and also to stack the switches, the 3Com architecture supporting up to eight in a single managed stack. A pair of Gigabit UTP modules to fit the slots are included in the box. However two is the limit and if you plug fibre adapters into the other two the UTP connectors will stop working.

A local console port is also built in which can be used to both configure and manage the switch via a command line interface. Or you can use SSH (Secure Shell) over a network connection, an SNMP console or a Web browser.

We used a browser and found the 3Com interface to be very capable but slow. Still, it does the job with neat graphical representations of switch status and easy-to-follow menus for configuring the available features, including Power over Ethernet.

As well as its built-in supply, a big plus with the 3Com switch is that it offers a connector for an external RPS (Redundant Power System). Unfortunately, the company doesn't have a product of its own to take advantage of this so, instead, has partnered with Eaton Corporation to offer a solution based on its Powerware system, the details and availability of which can be found on the 3Com website.

Whether using the RPS option or not, a good 300W of DC power are available for PoE with power support turned on by default on all 24 UTP connectors. As a result you can fully populate the switch with no worries about whether there's enough power to go round. On top of this you get useful per-port controls to turn power on and off, limit the amount that can be drawn and prioritise allocation.

All of the devices we tried worked as expected and we were pleased to find facilities to see how much current each was drawing to help fine-tune the setup.

Other plusses are Layer 3 routing capabilities, built-in security and QoS (Quality of Service) options. However, the core switching performance of the Switch 4500 PWR is a little disappointing for a switch in this price bracket.

Impressive in PoE terms but otherwise disappointing at this price level