This is by far the biggest and most heavy duty of the packages we've chosen to look at for this review. Commerce Server 2002 is the most recent full release, though it's worth bearing in mind that the 2006 version is currently in beta testing and is destined for release shortly. 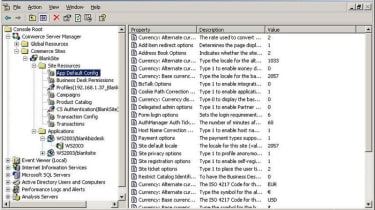 This is by far the biggest and most heavy duty of the packages we've chosen to look at for this review. Commerce Server 2002 is the most recent full release, though it's worth bearing in mind that the 2006 version is currently in beta testing and is destined for release shortly.

As with most Microsoft products, Commerce Server is available in a number of editions, of which the two mainstream ones are Standard and Enterprise and each supports up to ten on-line stores per web server (it's worth noting, however, that this is a recommendation and not a hard limit). The Standard edition will be sufficient for the majority of installations - it supports up to two CPUs per server and two web servers - for resilience and load sharing - per application, while the Enterprise edition scales to 32 CPUs - far and away beyond the requirements of most businesses - handles unlimited applications and includes a raft of business analysis and reporting tools that you don't get with the Standard edition.

The installation process is a bit involved, because there are a number of prerequisites. First comes the .NET Framework, if you don't have it on your server already, and then you need to install SQL Server (with at least Service Pack 3) in order that CS2002 has access to a database it can use to store its underlying data. Only once these elements have been installed can you go ahead and set up the CS2002 package itself - though to be fair the process is a fairly straightforward wizard if all you need are the default options.

Once everything is installed, you find yourself largely where you started - at least that's the way it looks. This is because CS2002 isn't an e-commerce package with a front end that you can use to place your products into the store. Instead it's an underlying system that allows you to develop your own 'applications' (notably Web sites). In fact CS2002 is employed as an engine for defining, storing and processing the product information and purchase activity. To this end, the system ships with a collection of components for Visual Studio, which provide an interface to the functionality of CS2002.

You therefore develop your applications under Visual Studio using ASP.NET; CS2002 adds a set of libraries that provide the programmer with interfaces into the various Commerce Server facilities. This doesn't mean you'll have a store up and running in minutes, though - far from it. This is not a ready-built store-in-a-box. It is, however, a very good back-end on which a medium or large business with sufficient in-house or contracted-in development staff can build a rock-solid e-commerce system.

So what will CS2007 bring? The main change is to bring the package in line with all the new gadgets that come with Windows Server 2003, release 2.0 of Microsoft's .NET Framework and the new Visual Studio 2005, which comes highly recommended as it spots 99 per cent of your errors and does nice things like presenting pick-lists for method, object and type names at appropriate points, thus vastly reducing development time. The initial learning curve has also allegedly been reduced too, so you stand a better chance of getting a product built in a sensible timeframe.

Big and expensive, but massively scaleable