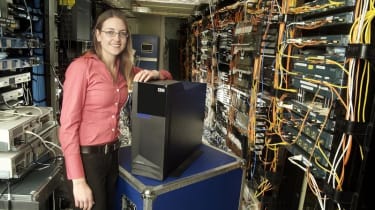 IBM, the first tier one vendor to use AMD processors, has further strengthened its partnership with the chip maker, announcing five new server platforms based on the forthcoming Revision F Opteron processors.

The new processors will support DDR2 memory and the long awaited Pacifica virtualisation technology, now simply called AMD-V. Revision F chips also feature a new type of socket and customers will be able to upgrade from dual to quad-core chips using the same socket, when they become available.

In the meantime IBM has used AMD's HyperTransport technology to enable buyers of the new BladeCenter LS41 server to upgrade from 2-way to 4-way multi-processing simply by plugging in a daughterboard.

According to Stuart McRae, IBM worldwide marketing manager for System X and blade servers, the daughterboard plugs directly into the HyperTransport bus and will enable customers to buy the processing power they need only when they need it.

"Most customers of 4-way systems only start out with two processors," said McRae.

"With the BladeCenter LS41 they don't have to buy the server real estate up front, they can just add it, in seconds, when they want."

As well as the BladeCenter LS41, IBM has also introduced a new 2-way blade, the LS21 plus three new rack servers, all based on Revision F Opterons. Two of the rack servers - the 4-way System x3755 and the 2-way x3655, also feature new IBM Xcelerated Memory Technology.

This enables the DDR2 memory to be accessed at its maximum speed regardless of how much is installed, providing a claimed 15% performance boost compared to other standard implementations.

Alongside the new Opteron server IBM has also announced a new "Cool Blue" portfolio of products aimed at reducing energy requirements and heat emissions. The first component, IBM PowerExecutive, is available free of charge to System x and BladeCenter customers and enables them to measure and meter server power usage and heat emissions.

"With IBM PowerExecutive customers will, for the first time, be able to monitor and, eventually, cap energy consumption on a per server basis."