As customers spend more on power and cooling in their data centres than they do on computers, IBM partners with AMD to produce a range of low power, low heat blade servers and support technologies 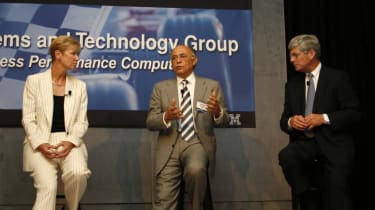 The machines, powered by AMD Opteron processors, deliver up to 21 per cent more computing performance for the same power consumption as previous IBM servers, the company claims. According to IBM, some customers now spend more on power and cooling in their data centres than they spent on buying the equipment in the first place.

IBM's response is to position the refresh to their server line as "energy-smart business computing systems". The new range includes two blade servers: the LS 21, a two-way enterprise class blade optimised for performance computing and a similar model, the LS41, which can scale to a four-way unit by adding an additional card to the blade unit.

The blade servers were announced alongside three new System x servers: the mid-market x3755, the "performance" x3655 and the x3455, which is a high performance computing node aimed at clustered applications.

IBM further claims that its new blade servers are particularly energy-efficient, delivering up to 40 per cent more computing performance per Watt than competing systems.

According to Bernard Meyerson, chief technologist for IBM's systems and technology group, the AMD processors run more efficiently than competing CPUs from rival Intel. The Opteron runs at 68 Watts, against around 90 Watts for comparable Intel units.

IBM claims other advantages for its systems. Sharing components such as network interfaces and I/O between all the blades in a chassis makes blade-based systems inherently more efficient than rack-dense servers.

Power efficiency is an increasingly important consideration for IT buyers, analysts say. Rising energy costs, as well as data centres literally running out of power, are set to boost demand for IBM's machines.

"Power is now high, if not number one, on the CIO agenda, says industry analyst Joe Clabby of Clabby Analytics. "They have to get their power use under control and that will force decisions on whether to move to a new architecture in order to reduce operating costs."

IBM also confirmed it would offer a water-cooled radiator that will fit on the back door of a rack cabinet.