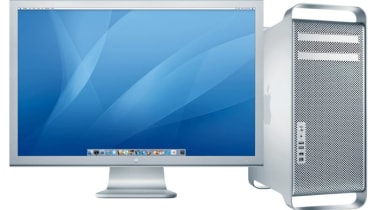 Apple Computer has completed its transition from the PowerPC platform to Intel's x86 with the launch of its latest Pro desktop computers and enterprise servers.

While the announcements were exactly in-line with expectations, the underlying story is different, and much more radical than might appear at an initial glance.

Apple has completed the transition from G4/G5 to Intel ahead of schedule, and has done so using the top range chips available from Intel. Yet again, Intel has given the company access to its latest technology ahead of the competition.

Apple has managed to launch quad processor desktop machines across the entire workstation range at spec and pricing levels that will compete head-on with the likes of Dell.

The specs speak for themselves - two dual-core 2.66GHz Xeon processors, giving four CPUs. A gig of ram, 250GB hard disc, a NVidia 7300GT graphics card with 256Mb of ram, and a 16x Superdrive DVD burner. All for a price tag of 1,699. You can increase and reduce the processor spec, ram, disc and video to your hearts content, and a maximum spec machine with 16Gb of Ram will run to over 6,000.

The OS is now 64bit throughout now. It features a rollback application called Time Machine that automates your backups to any suitable destination, and offers an impressive 3D user interface. All future versions of OS X will be a single box, so every machine, including upgrades, will get technology such as its Front Row media interface.

Spaces is a virtual multi screen solution that goes beyond the screen and window management functions introduced in Mac OS X Tiger.

Spotlight, the built in indexing solution, has been extended to support network and server searching too. Core Animation built into the OS delivers Hollywood grade 3D user interface experiences. Universal Access will offer higher quality text to speech conversion, and even Braille support.

Leopard is expected to be released in spring, most likely January 2007.

Jobs also announced that Apple has doubled its laptop market share from 6% to 12% in the last quarter.

Noted by their absence from the keynote: No announcement on 10Gig Ethernet. Nothing on the future of Fibre channel or the Xserve Raid storage product.