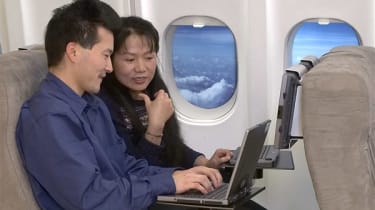 Boeing's Connexion service has failed to live up to its hype and the company has announced it will kill it off, shouldering costs of up to $320 million in the process.

The decision to phase out the high-speed, in-flight broadband offering, launched six years ago, follows a detailed business and market analysis, according to the aerospace manufacturer.

"Regrettably, the market for this service has not materialized as had been expected," said Jim McNerney, Boeing's chairman, president and chief executive.

The innovation was touted as an exciting area of growth for Boeing, but it has not made quite the impact it had hoped to. The company plans to phase out the service, but would not say how quickly it intends to do so.

The announcement did not come completely out of the blue. In June, the company said it was reviewing the service due to low levels of adoption.

However, the news does contrast with how upbeat Boeing was just nine months ago, when it received an accolade for being the 'World's Leading High Speed In-flight Internet Service Provider' at the 12th annual World Travel Awards in London.

"Winning this award for the third consecutive year is a welcome validation of our success, and a recognition of the entire team's efforts in bringing data and live global television services to airline passengers' laptops," said Connexion by Boeing president Laurette Koellner in November 2005.

"It truly is an exciting time for the travel industry and our airline customers as we collectively embrace emerging mobile technologies that will make the travel experience more meaningful and productive."

Boeing's predicament serves to demonstrate how quickly industry tables can turn. Analysts had also hailed the company's innovation as a strong market contender.

"Connexion by Boeing's early start in the in-flight WiFi service market will give the company an advanced lead in the market," said Hwasun Lee Garin, an associate analyst in IDC's Wireless and Mobile Infrastructure program, in June 2005.

"Competitors will need to play catch-up to Connexion's partnerships with major airlines and content providers and roaming agreements with land-based WiFi operators."