The IT industry has done a great job promoting the benefits of WiFi but has been less successful delivering on the hype. 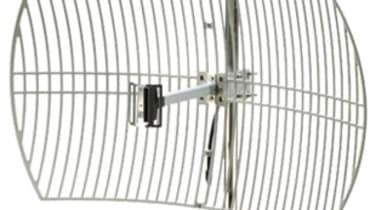 The IT industry has done a great job promoting the benefits of WiFi (802.11x); it's genuinely hard to remember that there was once a serious close-range wireless competitor in the shape of Bluetooth.

However, the WiFi community has been less successful delivering on the hype they have built up. The ugly truth is that current data transmission speeds for Wi-Fi are, shall we say, underwhelming. Underneath all the press and marketing hype about flexible working and road warriors downloading SAP images to their laptops over a tasty latte, real users have been getting by on meagre bandwidth.

"802.11g was far too slow - it was billed at 54 meg but really you got more like 20," points out Clive Longbottom, Service Director at UK analyst firm Quocirca. "Many customers ended up with a 2-10 Meg transmission in reality." There is also the little problem of range: 11g was claimed to offer 100 metres, a figure some laptop mavens will spit their muffins out over.

You may baulk at those numbers - especially if you are a WiFi device or service provider.

Moving from g to n Such criticisms are supposed to become academic with the anticipated rollout of 802.11n. The public story is that this iteration of the 802.11x standard will deliver more like 200 Megs, but realists believe if you cut that figure in half you may be nearer the mark.

This is good news, though, as it means users will finally start getting Internet connectivity rates that match the expectations some of the current Wi-Fi fever has been generating. Coverage is supposed to go up to 300 metres and up to 300 Mbits in terms of data speed: there is also (boring but important) a different approach with 'n' to antenna and transmitter support and the way the digital signal chip processors are used, all very promising of a real step-change in performance.

So bottom line: 11n is a Good Thing. Users will be able to do reasonably challenging stuff, at least be confident they can open their Viagra mail on the go. To quote one observer, Gordon Lindsay, Product Manager for Wireless at Broadcom - "11n will open up the ability to have wireless apps that can be used not just by the individual PC but the whole network." Example applications serious people say will now be possible include the transfer of a reasonably big digital picture file from camera to hard disc just using WiFi or iPod-style digital content transfer on the go, for instance.

Moving WiFi beyond the consumer space That's on the consumer end of course but for Nakita Diguardia, Senior International Product Marketing manager at Belkin, "Now we can talk about the truly wireless business office in a way we weren't able to before. Yes that depends on how much down and uploading is going on at peak period or applications wireless-enabled at one time, but this looks very promising."

There are caveats to this WiFi future. One, no matter what the suppliers tell you it won't be until 2007 that the standard is properly nailed down so buyer beware if you buy kit labelled 'n' compliant - it just can't be. This situation has promoted analyst group Gartner to recently warn, "Given that the IEEE does not believe the ratification will take place until 2007, and that specification modifications might still be approved that may not be implemented in current offerings, [we] believe vendors that market draft ['n] compliance are misleading prospects, even if they articulate what such compliance means in other documentation".

Second, IT professionals in charge of Wi-Fi support in their organisations can't depend on the standard itself to solve all their wireless connectivity headaches. Each of the 802.11x process letters - b, g etc - refer to new parts of the spectrum, incidentally, so it's not like a later letter is automatically a guide to better/superior performance in the field - or rather, the Dilbert cubicle environment most organisations will in reality be offering wireless access to staff.

"The problem is that a lot of that foam and other soft office furnishings absorb the radio waves," says Longbottom. "To get the best performance specs out of 'n' you'll need as few solid walls as possible but lots of things for the waves to bounce off. So you can't know without testing how many stations you'll need. The only real way to sort that out is to use a sniffer tool to look at your network and see what sort of speeds you can realistically get to in your actual environment."

So 802.11n is a definite step in the right direction - but be realistic in terms of setting your user expectations, is the message.