The QNAP NAS-5100 takes a different tack to the competition as this head unit can have multiple external disk arrays daisy-chained from it allowing storage to be expanded easily and in large chunks as well. 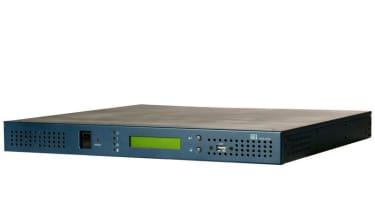 The QNAP NAS-5100 takes a different tack to the competition as this head unit can have multiple external disk arrays daisy-chained from it allowing storage to be expanded easily and in large chunks as well.

Ultimate Storage offers an extensive range of disk arrays but for the review we were supplied with the head unit and a very basic IDE-SCSI six drive array as the company was unable provide one of its latest SATA-SCSI arrays.

In terms of hardware the NAS-5100 head unit delivers the most horrible specification - the Vox Technology motherboard is a truly unknown quantity whilst the processor and memory are positively prehistoric.

Fortunately, the network connection is handled by a pair of Intel Gigabit Ethernet adapters and the disk arrays are looked after by a dual-channel LSI Logic Ultra320 SCSI card. Unfortunately, this array and head unit combination clearly had an adverse impact on performance with this system delivering the worst results of all.

Despite all these woes the Linux based kernel does actually offer quite a good range of storage features. All management is via a web browser and on first contact a quick start wizard helps initially by firing up a ten step guide to basic installation where you can add network details, creates volumes, set up shares and dish them out to users and groups. As the disk array was already configured internally as a RAID-5 array the appliance simply saw a single disk which we could then carve up into volumes.

If you wish you can present the disks to the appliance as JBODs and let it manage RAID functions in software. The Linux kernel supports RAID-0, -1 and -5 arrays although with performance so poor in the tests we'd have to wonder at the wisdom of putting any more loadings on the OS.

Authentication extends to local usernames and groups or AD domain membership. Client support is the best of the bunch as along with Windows, Linux and Unix systems the appliance can support Macintosh and NetWare clients. The appliance also has the ability to act as a web and FTP server.

Volumes are easy enough to create although the formatting process was also slow and the interface gives no indication of progress. Snapshots can also be enabled for each volume allowing point-in-time backups to be taken and stored locally. Usefully, these can be scheduled to run at regular intervals and existing snapshots can be viewed and restored directly from the web interface.

For network shares you have a wide range of access controls so you can determine read and write privileges for individual users and groups. Quotas are also supported and a base value in MB can be set at the volume level which can then be customised for selected users.

Had Ultimate Storage provided a better disk array for the review performance would have been substantially better. The head unit does offer plenty of storage options and the Linux kernel has plenty of useful features but the hardware specification simply doesn't justify the price.

A poor showing all round from Ultimate Storage as although the head unit delivers a lot of NAS related features the low performance, weak hardware contingent and lack of value can't be ignored