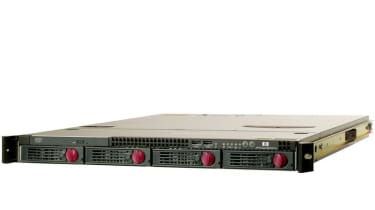 Along with Evesham Technology, HP is another storage vendor that has been quick off the mark to implement the second release of Microsoft's Windows Storage Server 2003 (WSS2003) operating system.

This HP unit brings in a range of new features including improved Shadow Copy Services for volume snapshots, tweaks to performance for the CIFS/SMB and NFS protocols and, with Microsoft's acquisition of String Bean Software, improved support for optional iSCSI services.

As we observed with the SilverSTOR NAS 3142, the biggest change is that remote management is now via RDP. Having been used to the latter for some years now it took us a little while to get to grips with the new MMC snap-in.

Installation is a swift affair as a rapid start-up wizard handles the more mundane tasks and then you can get down and dirty with creating shares and setting up volume and user quotas for controlling storage usage. Predefined templates make quota creation even easier and defining them as hard or soft quotas determines whether they merely report on breaches or enforce an action. You can also apply utilisation thresholds as a percentage so users get plenty of warning before they get the chop. File screening allows you to control precisely what file types are allowed on the appliance whilst the storage reports tool helps you keep track of details such as duplicate files, quota usage and file ownership.

Physically, the DL100 is a simple 1U low-profile rack system which comes equipped with a quartet of 250GB SATA hard disks in hot-swap carriers. These are routed through to a 4-port Adaptec RAID card and configured as a hardware managed RAID-5 array. On the review system there's no room for further expansion but HP offers a model with an extra PCI slot for adding a SCSI card allowing external tape drives to be used. The processing department is well endowed as the price includes a decent 2.8GHz Pentium D module and this is partnered by 1GB of memory.

The DL100 is eminently manageable as along with access via a remote desktop connection you can run HP's Server management tool which provides a complete rundown on installed hardware and each component's status. The interface is a little simplistic but it does provide good alerting facilities as you can send warnings via email if problems are detected.

The RAID card is managed by Adaptec's own Storage Manager utility which also provides good alerting features. We found read performance to be on a par with Adaptec's Snap Server 550 although not so good when it came to the write test. However, for the latter HP's hardware RAID controller did show a clean pair of heels to the Boston and Tandberg Data systems that utilise software managed RAID.

With a Pentium D processor at its heart the DL100 has a more up to date hardware specification that many. It delivers the latest version of WSS2003 which provides a high level of features although the storage capacity is on the low side considering the price.