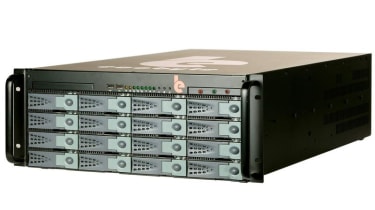 At first glance the NAS16SX looks to be a standard high-capacity NAS appliance but it has a few smart tricks up its sleeve as well. Along with support for iSCSI targets it has the ability to run multiple virtual servers allowing it to behave as an application server.

The appliance can run Red Hat Enterprise Linux and will appear to the network as a physical server that can access the NAS storage as though it were another network client.

Appliance installation is simple enough and the web interface is of very basic design but easy enough to use. The home page provides access to the server properties, client type support, virtual server creation and firmware updates. Client support is good with Windows, Linux, Unix and Macintosh systems on the guest list while access controls can be enforced using local users and groups or AD domain authentication. Both network shares and iSCSI targets are set up by creating exports and for the latter you can use the generated IQN or enter your own names. Network share options aren't so good as the appliance doesn't support quotas.

However, along with global exports you can create private shares that are available only to selected users. Snapshots can be used to take a read-only image of a selected volume and these can be run to a schedule. Virtual server setup doesn't take long although Ecobyte must provide an image file which needs to be in an export root directory. You simply provide a name, select an image from the list and enter an IP address for it.

Using the VNC Viewer we were able to Telnet to the command line and fire up remote access to the XWindows console and configure it as though it were a physical Linux server. To keep the virtual server protected it is run from the hard disks and not from the IDE Flash Disk which looks after the NAS OS.

Ecobyte delivers a good selection of hardware with a pair of 2.8GHz Xeons in the driving seat. Storage capacity is high on the agenda as the solid 4U chassis has room for up sixteen hard disks with the review system supplied with a full compliment of 400GB WD SATA drives. These were divided into two banks of eight drives with each managed by separate AMCC RAID controllers.

Usefully, the web interface provides a physical view of the hard disks plus the controller they are attached to. The RAID-5 arrays on the review system were hardware managed but it is possible to have a combination as the Linux OS can manage them as well. Overall performance was reasonable although the hardware specification made its mark in the write tests with performance only dropping slightly over read speeds.

Along with an impressive storage capacity for the price, Ecobyte is offering a well specified system. Build quality may only be average but the combined virtual server and iSCSI support does make the NAS16SX stand out from the crowd.