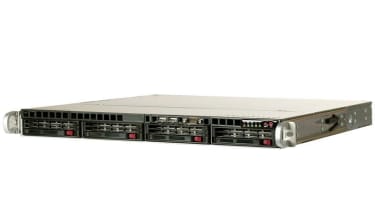 Seeing as Boston is Supermicro's UK distributor it comes as no surprise to find the 1000N Pro is a complete partnership of this Tiawanese manufacturer's chassis and motherboard. What is unusual is that Wasabi Systems is the power behind the throne. We say this as this software vendor has suffered from a low profile in the UK market and as such has missed out with many Tier 2 storage vendors who have traditionally favoured Microsoft's Windows Storage Server 2003 (WSS2003).

Wasabi originally cut its teeth a couple of years ago in the iSCSI market as the first version of its Storage Builder was specifically designed to support this protocol. NAS support came much later as the Storage Builder for NAS running on the 1000N Pro was only launched this year. Note that these are two separate products and that iSCSI support is not integrated into this new version.

For the price you're getting a reasonable level of hardware with storage handled by a quad of 500GB SATA hard disks fitted in hot-swap carriers. The motherboard does have an embedded 4-port Intel SATA controller but this lies idle as Boston has used the only PCI expansion slot to fit an AMCC RAID card with the drives configured in a single RAID-5 array.

Initial configuration is helped along nicely by the well designed web interface which comes packed with wizards. A useful feature is that the NetBSD based OS is fully aware of the AMCC RAID controller allowing you the opportunity to configure and monitor it remotely. Array verifications can be run on demand and if there's space, new drives can be inserted into the appliance and configured to join existing arrays or become hot-spares.

Backup options are extensive as the 1000N supports snapshots which can be scheduled for specific times and days of the week and previous versions are retained based on a time period or the percentage of space being used. Usefully, Wasabi can also emulate Microsoft's Shadow Copies of Shared Folders allowing users to access snapshots and restore their own data from Windows Explorer. There's much more as standard backup facilities allow selected volumes, folders and files to be secured to a local location to a schedule that includes full and incremental backups. Tape drives are also supported but unfortunately on this system there's simply no room to fit an interface card for one.

Security extends to setting access privileges based on local username or group membership and the appliance can join an AD domain. Extensive support for quotas also means you can keep your users and groups under control by limiting the amount of storage space they can consume. Soft quotas allow them a grace period if they get too greedy whilst hard quotas enforce storage limits absolutely.

The 1000N Pro may be the smallest appliance on test but it does provide a high storage capacity and plenty of data backup features. It's reasonably priced too although overall performance is below par when compared with the majority of systems in the group test.