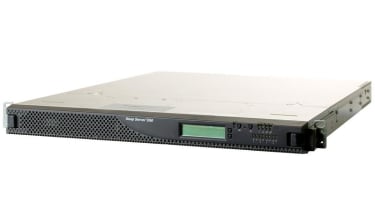 Supermicro is proving to be a popular choice as Adaptec is one of many vendors that use its chassis and motherboards for its storage solutions. The new Snap Server Series 500 family brings a range of interesting new features with the top-of-the-range 550 reviewed here aimed firmly at the mid-sized business.

However, before we venture into its innards we need to clarify the status of the product family. At the time of writing Adaptec was in the process of selling the entire product line. In fact, it's been trying to shift it for over four months now but negotiations with interested parties are taking longer than expected. Adaptec's plan is to offload all the products and companies it has acquired over the past couple of years and focus purely on its core ASIC and HBA disk and RAID controller components.

And so to the 550 and a feature that makes the Snap Servers stand out is that they have always been built around a Linux kernel. Consequently, the preinstalled GuardianOS has had plenty of time to mature and now has the ability to rival Windows Storage Server 2003 in terms of features. It's also a lot less demanding on system resources and the fact that it's a full 64-bit OS should show up with better overall performance. The appliance is completely headless and its remote web interface is nicely designed and very intuitive.

Adaptec offers some very tempting expansion proposals as the four SATA hard disks are managed by an LSI SAS controller card and it's possible to daisy-chain enough SANbloc S50 SAS disk expansion units to increase capacity to a mighty 43TB. These appear to the system as JBODs, are configured as separate RAID arrays from the OS and existing volumes can then be expanded on the fly into the new storage space.

The full range of NAS features are up for grabs with support for all client platforms, disk quotas, volume snapshots plus local user and group based access controls or integration with AD domains. With the snapshot feature you must decide how much space should be set aside during volume creation. An external SCSI port sits ready to receive an external tape drive and you have BakBone's NetVault 7.1 preinstalled along with five client licenses and a 500GB virtual tape library included in the price. The 550 is also one of two appliances on review that came with iSCSI targets included. Target creation is simple as you select a volume, enter a capacity and activate CHAP authentication if required. However, make sure you use separate volumes for target creation as these cannot be included in snapshots or backed up by the local NetVault software. There's more as anti-virus scanning courtesy of Computer Associates is also included although you can only run on-demand scans at scheduled intervals.

The 550 combines everything you could want from a NAS appliance - capacity, expansion, performance and feature are all in abundance but we would recommend waiting until the new owners of the Snap Server reveal themselves.