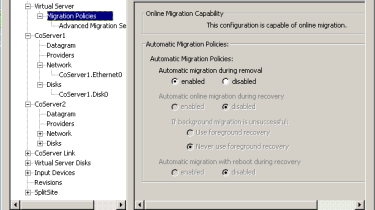 Up until now Marathon's sole product was its everRun FT software which while delivering a superb range of features does have a few limitations such as a lack of support for SMP and a price tag that puts it beyond the reach of many SMBs.

The concept behind the HA software is virtually the same as for FT as it uses two physical servers, called CoServers, to present a single, virtual server to the network. RAID-1 disk mirroring is performed across the CoServers to ensure that both disk systems are synchronised. As all components are duplicated if any fail then the software redirects all operations to the functioning component. HA delivers a wide range of new features that are designed to improve its scalability.

The primary server is designated as the Active component whilst the secondary server is the Ready server. For fault tolerance, FT can handle a complete physical system failure which will not affect operations as the virtual server is being hosted across both systems. The same situation with HA will cause some downtime as the virtual server has to be migrated across from the Active server to the Ready server. This means that transactions occurring at the time the Active server failed are unlikely to be preserved. Essentially, FT provides full server redundancy whereas HA offers component redundancy.

To test HA we used a pair of HP ProLiant ML370 G4 servers equipped with dual 3.2GHz Xeon processors and 1GB of memory. Each storage sub system comprised an HP Smart Array 641 RAID controller and a pair of 73GB hard disks. Your first job is to decide how the servers are to be connected together as for disk mirroring and I/O redirection to function the servers must be linked directly with up to two Gigabit Ethernet crossover cables. You'll also need adapters for presenting your services to the network over a virtual connection and you can use a fourth for isolating management access.

Our test servers had four Gigabit Ethernet ports which we configured for single CoServer and redirected links. We decided to keep management local to the servers so left this network connection out of the equation.

Software installation is a fairly straightforward if lengthy process as you need to install the Windows OS on each physical CoServer. Next, you install the relevant Windows service packs and once these are in place you load the HA software on each one. This must be done on CoServer1 first followed by CoServer2 and during these phases you define what roles each network adapter will play. From the HA management interface you create a virtual boot disk which then requires a third copy of Windows installed. Note that the virtual server must have an OS installed that is identical to that loaded on the CoServers.

If you've applied SP1 then the virtual server must have a slipstreamed version of WS2003 which already includes this as you can't add it later. You then load the HA management software on your new virtual server after which you can install your chosen applications.

The HA Manager utility allows the virtual server to be accessed locally from within the virtual server desktop, from either CoServer, via a Remote Desktop link or from a separate Windows client on the management LAN. It's virtually the same as that used by FT and shows the status of all the servers and redirected devices and provides tools to shutdown or restart the virtual server, the CoServers and the entire HA environment.

Virtual devices are configured using the separate Device Redirector utility and once a new virtual disk has been created it will be automatically mirrored across to the Ready server. Note that all Windows patches and hot-fixes must be applied to the physical and virtual servers and the HA environment will require a full restart to ensure all three are running precisely the same updates.

If you use identical CoServers is it is possible to run an online migration of the virtual server from the Active system to the Ready system without any downtime. If they aren't the same then the virtual server is rebooted once the migration has completed. The main advantage here is that general maintenance or component replacement can be carried out without affecting normal operations.

As we had identical servers we tested the migration feature and saw this task completed in a mere eight seconds. We then powered off the Active server to simulate a complete system failure. The HA Manager acknowledged that the virtual server had gone down, rebooted the virtual server on the Ready system and was back up in only 48 seconds. If a component such as a network link goes down on the Active server then the HA Manager simply redirects all I/O through the equivalent port on the Ready server.

Although everRun HA doesn't provide full server fault tolerance it does look a far more cost-effective alternative to expensive hardware solutions and doesn't lock you into a proprietary platform. We found it very easy to use with good automatic responses to component failure and Marathon's licensing system makes it very flexible as it is based on the physical processor socket count so you don't get charged on a per core basis.

An interesting, cost-effective alternative to hardware fault tolerant server solutions that supports standard Intel-based servers and is particularly easy to manage and maintain