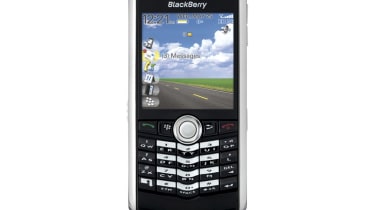 Enthusiastic BlackBerry users may be surprised to learn how few devices RIM has sold for a product that has become a byword for mobile email. Any one of the UK mobile networks has three times as many subscribers as all the 5.5 million BlackBerry users in the world and Windows Mobile devices are outselling BlackBerry three to one in the UK. A BlackBerry has been seen as too big, too business like, too expensive or too complicated.

The BlackBerry Pearl 8100 proves almost all of that wrong and it could reach the mass market RIM has only dreamed of in the past. And for IT admins and existing fans, the good news is that yes, it is still a BlackBerry. It is also a smartphone that is as small, light and sleek as any mainstream phone. You can forget you have it in your pocket as it weighs only 89 grams, but it has excellent battery life. If you've used a Blackberry in the past, the Pearl will feel very familiar. It still runs RIM's proprietary OS, and the same Java applications. The Pearl also keeps the USB charging and connection socket of bigger BlackBerries.

The trackball on the front doesn't only look good; it's comfortable to use with enough feedback that you're always in control and it makes it easy to scroll through options, click to select one and then click again for a context menu. One option turns it into a brightly coloured indicator that flashes different colours when the phone rings. The menu and back buttons either side group all your options together neatly but leave enough space for the answer and hang-up buttons too. Existing BlackBerry fans may find they're reaching for the scroll wheel the trackball replaces, but left handed users will find it much simpler. You still get dedicated volume and mute buttons plus two 'convenience' buttons, one on either side. By default they're set for the camera and voice dialling but you can swap them to other applications.

There are tradeoffs with any device. The Pearl supports EDGE and GPRS but not 3G; built-in compression keeps email speedy and helps with web pages, but this isn't the fastest connection you can get. Making it half the width of a normal BlackBerry means only half as much room for the keyboard. The Pearl still uses a QWERTY layout but instead of one key for each letter, most letters double up and RIM's SureType predictive typing works out which letter you wanted. This is a new version of the same system from RIM's earlier 'candy bar' phones; it looks at the rest of the sentence for clues and learns from your corrections to improve over time. Alternative suggestions show up on screen as you type; the trackball makes it fast to pick the right one, but with unusual names you will still end up hunting and pecking letter by letter.

While the keys are small, they have a very positive action so you know when you've hit the key; they travel a long way down for such a thin device; not only does that make typing long messages more comfortable than bashing your fingertips against a button that hardly budges, but it also gives you a chance if you notice you're on the wrong key just after you start to type.

Any BlackBerry gives you access to your email, quickly and unobtrusively. Messages are compressed and downloaded automatically; with longer messages you only get the first 2K (because it's compressed it has to be a very long email not to fit into that) but if you want more it downloads seamlessly as you scroll through the message. This is in contrast to Windows Mobile where you have to choose to send and receive or wait until the next connection. If you use RIM's BlackBerry Enterprise Server you get access to all your IMAP folders, plus calendar and contacts. Consumers and small businesses use a web front end to configure existing email accounts, which only gets you your inbox. You can view PDF files and office documents; you'll need extra software if you want to edit them but for that you'd probably want a device with a full keyboard.

The Pearl is the first BlackBerry with multimedia features. The camera is only 1.3 megapixel, when much of the competition is already shipping 2 megapixels or more. We'd call it adequate rather than exciting but the images are clear and colourful and zooming with the trackball is particularly intuitive. The microSD slot is behind the battery; not as convenient but it does save space and not many people want to swap cards on the fly. The media player plays music and videos in a few useful formats (MP3, ACC, MPEG4 and H.263). You can tell it's RIM's first media player; there's no fast forward or rewind in songs and no full-screen view of videos. On the positive side, the sound quality through the stereo headset is excellent. The screen is crisp and bright and the ambient light sensor adjusts both the screen and trackball brightness so your pictures and video look good, but don't run down the battery.

The Pearl looks the part of a consumer device; it fits in a pocket rather than in a laptop bag and it has good phone features, like speakerphone, conference calling and voice dialling. It has the email handling you expect of a BlackBerry, and the security; you can lock the camera and media slot by policy, so you don't need to worry about the MD showing up with a Pearl and asking you to support it. The question is whether mass market users will want email in a compact package enough to accept the camera and media player. But for a business user wanting the power of BlackBerry in a package that doesn't weigh down your pocket or make you embarrassed to make a phone call in public, the Pearl is a little gem.

Mass market users may not like the lacklustre camera and media player, but for a business user wanting the power of BlackBerry in a lightweight phone form factor, the Pearl is a little gem.